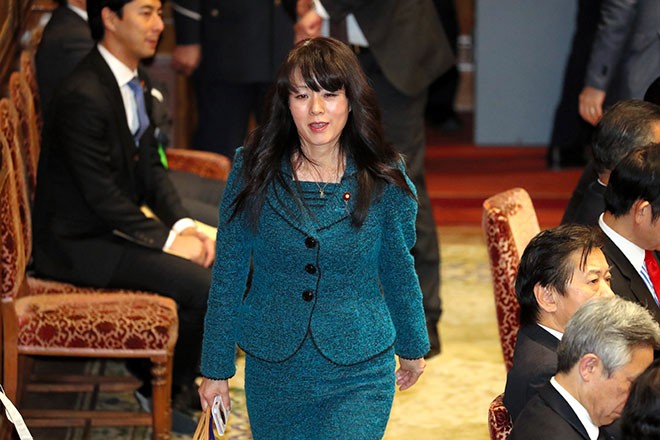 KYOTO--Four professors filed a lawsuit against a ruling party lawmaker at a court here claiming that she denigrated research by the academics on her Twitter account.

The group, which filed the suit at Kyoto District Court on Feb. 12, claims that comments made by Mio Sugita, 51, of the ruling Liberal Democratic Party, including "National scientific research funds were siphoned to support activists," have damaged their reputation in society.

They are seeking 11 million yen ($99,400) in compensation as well as an apology from Sugita on her Twitter account.

All are researchers on the gender theory or feminism, with each seeking between 1.1 million yen to 6.6 million yen in damages.

The researchers had been jointly taking on issues affecting Japanese women, seeking a gender-equal society, as well as research on the issue of women forced to provide sex for Japanese soldiers before and during World War II, using a national subsidy of 17.55 million yen from the scientific research fund over four years from 2014.

They claimed that Sugita unfairly criticized their research from March to July last year through online videos, a magazine and her Twitter account, on which she characterized their work as "research against national interests," "anti-Japan activity" and "figment," indicating that she did not support use of the fund for their research.

After filing the lawsuit, the four held a news conference in Kyoto’s Nakagyo Ward.

“We have been slandered through the spread of inaccurate information on the Internet,” said Muta. “It is abominable that (Sugita) said such things, since she is an influential figure as a Diet member.”

An official of Sugita’s office told an Asahi Shimbun reporter, “We cannot comment because we have not seen the complaint.”

Sugita is serving her second term in the Lower House. She wrote that same-sex couples are “unproductive” in the August 2018 edition of monthly magazine Shincho 45, published in July, provoking a public backlash. The magazine suspended publication in September.