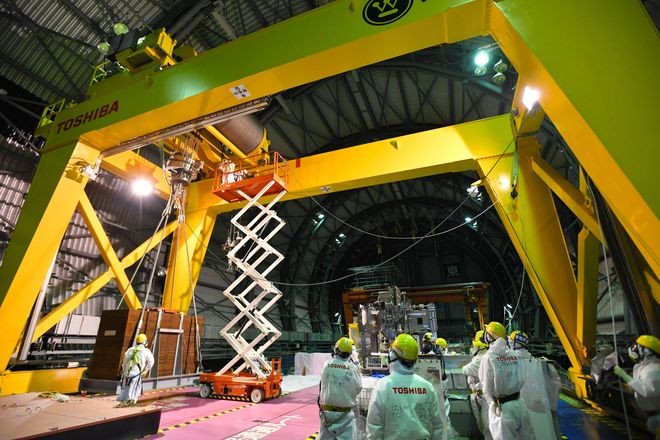 Tokyo Electric Power Co. workers operate a crane as part of training for the removal of spent nuclear fuel from the No. 3 reactor of the Fukushima No. 1 nuclear power plant. (Yosuke Fukudome)

Tokyo Electric Power Co. has instituted a rigorous training program so technicians can proceed with the removal in late March of spent nuclear fuel from the No. 3 reactor of the Fukushima No. 1 nuclear power plant.

A reporter from The Asahi Shimbun was permitted to observe a session Feb. 15 that involved using a huge 50-ton crane to lift and move a container, simulating the conditions under which spent nuclear fuel would be recovered.

The No. 3 reactor has 566 nuclear fuel assemblies stored in the fuel pool on the top floor of the reactor building.

Moving the spent nuclear fuel is considered an urgent task due to fears the crippled facility could be further damaged in the event of another major earthquake or tsunami.

A new roof for the reactor building was completed last year to contain any radioactive fallout.