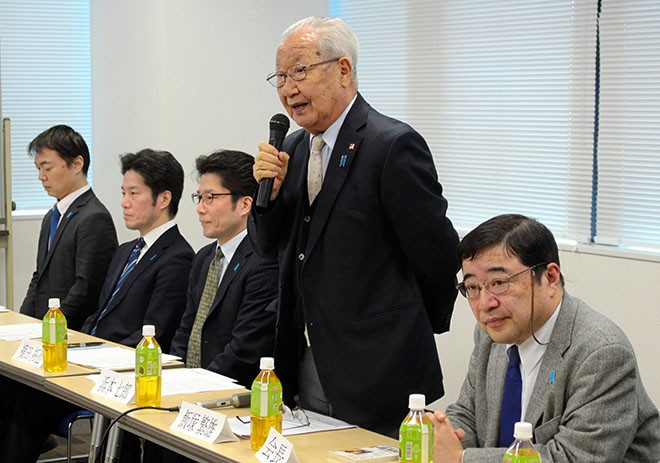 Shigeo Iizuka, second from right, who heads the Association of the Families of Victims Kidnapped by North Korea, speaks during a news conference in Tokyo on Feb. 17. (Ryuichi Kitano)

Relatives of Japanese abducted by North Korean agents decades ago directly appealed to North Korea's leader for their immediate return, saying if realized, they will not oppose normalization of diplomatic ties between Tokyo and Pyongyang.

Addressing Kim as "the chairman of the State Affairs Commission,” North Korea's supreme decision-making institution, the message reads: "We have no desire to obtain secret information (on North Korea) from abductees upon their repatriation from North Korea or to oppose normalization of diplomatic ties between Japan and North Korea.

"Family members of abductees simply aspire to live in peace with those abducted by North Korea, and the Sukuu Kai will continually press the Japanese government to realize the goal."

The message was uploaded to Sukuu Kai's website in Japanese. Korean and English translations are expected to be added to the site.

“We want the Japanese government to consider how it can bring North Korea into substantial talks on the issue," said Shigeo Iizuka, 80, head of the Association of the Families of Victims Kidnapped by North Korea.