A man called a "shin otoko” (man of god) is swarmed by men in loincloths eager to ward off evil fortune, during an annual shrine ritual, dubbed “hadaka matsuri” (naked festival), at the Owari Okunitamajinja shrine, also known as Konomiya shrine, in Inazawa, Aichi Prefecture, on Feb. 17. (Noboru Tomura and Yoshihiro Ogino) 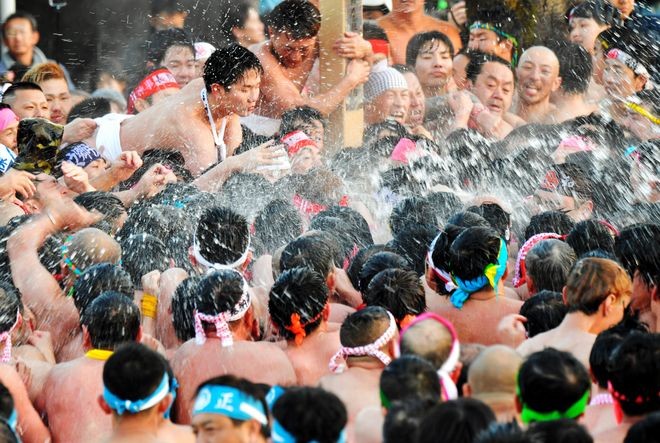 INAZAWA, Aichi Prefecture--A raging sea of about 9,000 half-naked men struggled to touch a "lucky" man, at a "naked festival" here, hoping to protect themselves from evil spirits and disease.

Shuki Matsumoto, 27, chosen by the shrine as this year's "shin otoko” (man of god) was immediately swarmed by the frenzied men clad only in traditional "fundoshi" loincloths when he appeared on an approach to the Owari Okunitamajinja shrine, also known as Konomiya shrine.

The shin otoko's role is to take all of humanity's misfortunes onto himself, relieving those who touch him on his way up to the shrine of their burdens.

Before they began pushing and shoving to try and make contact with Matsumoto, the men dedicated offerings called “naoizasa,” made of bunches of bamboo bound with fabric, which represent people's wishes for the annual shrine ritual called Naoi shinji, also known as the “hadaka matsuri” (naked festival).

It took about an hour for the shin otoko to make his way up to the shrine, near the end being pulled by a rope over the heads of the yelling men, who were dousing him with water the whole time in a purification ritual.

Thunderous cheers erupted from the crowd when he was finally pulled into the Naoi-den of the shrine.