Court orders bullies to pay family of boy who killed self 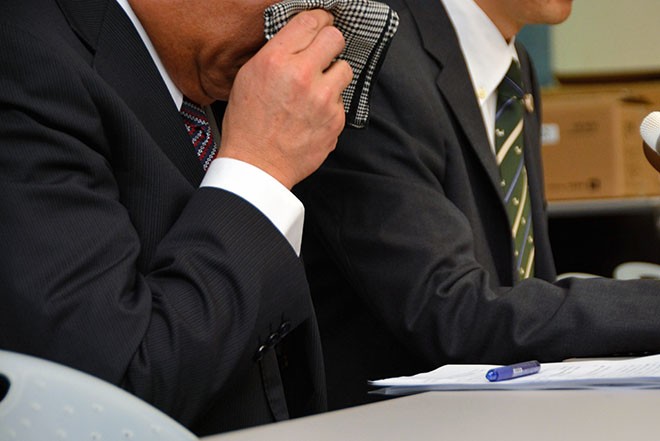 The father of a student who killed himself in 2011 wipes away tears at a news conference held after the Otsu District Court's ruling on Feb. 19. (Ryo Sanada)

OTSU--A court here recognized that bullying led to the suicide of a 13-year-old boy in 2011 and ordered his two tormentors to pay about 37 million yen ($333,845) in compensation to the bereaved family.

The Otsu District Court said Feb. 19 that the bullying by the two against their junior high school classmate started in September 2011 and made the victim feel isolated, valueless and suicidal.

“Their violence and other acts against the student gradually escalated,” the ruling said. “Generally, it was predictable that a person under such psychological circumstances would commit suicide.”

The boy, who was a second-grader at an Otsu city government-run junior high school, killed himself in October 2011. His suicide and the violence he had endured brought wide attention to the issue of school bullying and served as a catalyst for a law promoting anti-bullying measures that took effect in 2013.

The bereaved family had sought about 38 million yen in compensation from three of the boy’s former classmates and their guardians.

The boy’s parents welcomed the ruling.

“We did not expect the court to go as far as this in its ruling,” the father, 53, told reporters immediately after court’s decision in the Shiga prefectural capital.

According to the ruling, the two bullies hit and kicked the boy in his face, sprayed antiperspirant on him until the container was empty, and taped his mouth and bound his arms and legs with “hachimaki” headbands. In another incident, they tried to force him to eat dead bees.

The boy’s parents filed the lawsuit against the Otsu city government, three former classmates and the guardians in February 2012.

In January 2013, a third-party investigation committee set up by the city government compiled a report that said the bullying by the two former classmates was the direct cause of the suicide.

In response to the report, the city government admitted its responsibility and reached a settlement with the parents in March 2015.

The district court also examined the relationship between the student and the two classmates.

After becoming second-graders at the junior high school in April 2011, the three students were friends in the first term, which lasted until July.

But in the second term that started in September, the boy became a “bullied person” while the two classmates became “bullies.”

These roles became fixed, the ruling said, and the two classmates regarded the boy as a lower-ranked person.

The court, however, dismissed arguments that the guardians neglected their duties in supervising the classmates.

The ruling also said the third student named in the lawsuit, who was in a different class, was not involved in group bullying with the two classmates.