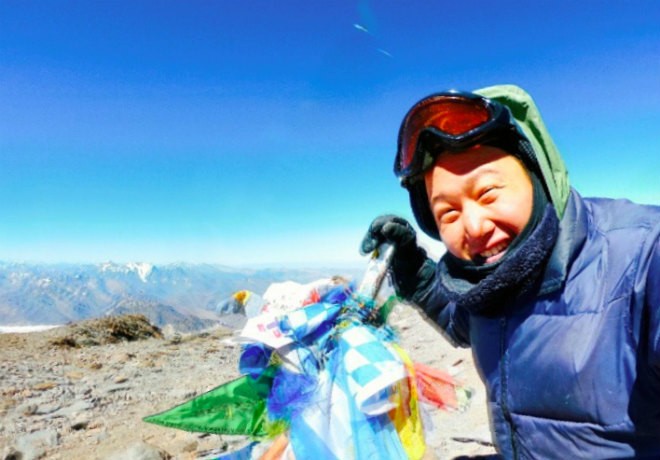 Satoki Yoshida reaches the summit of Aconcagua on Feb. 6 from a location at sea level along the Pacific Ocean. (Provided by Satoki Yoshida)

KONOSU, Saitama Prefecture--A mountaineer has completed the fourth leg in his worldwide adventure of scaling the highest peaks on all seven continents by starting from shorelines.

“I am full of joy because I succeeded in climbing the mountain in my own way,” Yoshida said.

His accomplishment came after health concerns forced 86-year-old adventurer Yuichiro Miura to abandon his attempt to scale and ski down the same mountain.

Yoshida was inspired by a mountaineer who completed a 1,200-kilometer course linking the summit of 8,848-meter Mount Everest--the highest mountain in Asia--with the Bay of Bengal in India.

Yoshida decided to scale the Seven Summits from shorelines, a process known as “sea to summit” climbing.

“Even Mount Everest is currently accessible by helicopter, and there are various ways to enjoy climbing,” Yoshida said. “I will pursue my own manner of climbing.”

While studying at a graduate school, Yoshida scaled 5,892-meter Kilimanjaro, the tallest mountain in Africa.

He later worked at a financial institution in Singapore and continued mountain climbing overseas.

Last summer, Yoshida quit the company and returned to Konosu, his hometown.

As his first step in September, Yoshida climbed the 2,229-meter Mount Kosciusko, the highest peak in Australia, on a six-day journey from sea level.

It took him 21 days to reach the top of Elbrus, Europe’s tallest mountain at 5,642 meters, while the trip up Kilimanjaro required 17 days.

In his latest endeavor, Yoshida solicited money to scale Aconcagua through crowdfunding for the first time. He received 920,000 yen ($8,314) from 70 individuals.

He started his trip from Valparaiso on the Pacific side of Chile on Jan. 16 and walked 221 km over 10 days to enter the mountain on Jan. 27. Good weather conditions allowed Yoshida to reach the summit on Feb. 6.

In May, Yoshida plans to begin his 45-day travel to scale 6,190-meter Denali, the tallest mountain in North America, which was previously known as Mount McKinley. He expects to spend 90 days from February 2020 to climb Everest.

His final journey is expected to open in November 2020, requiring around 60 days to conquer 4,897-meter Mount Vinson, Antarctica’s highest peak.

“Only three mountains remain, but all of them are difficult to climb, so I would like people to provide continuous support,” Yoshida said.