Abe moves ahead with base work in Okinawa after ‘no’ referendum 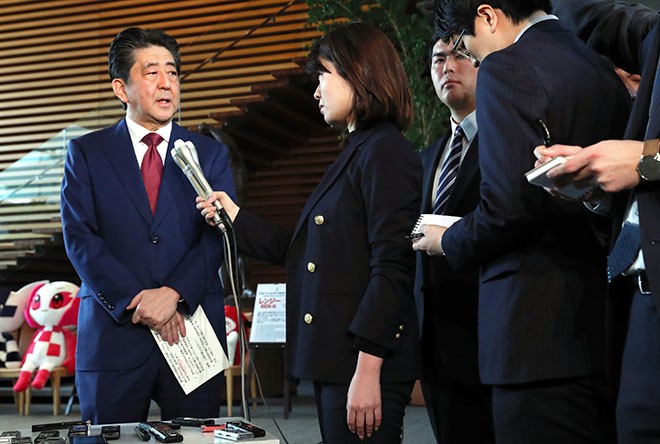 Prime Minister Shinzo Abe answers questions in Tokyo on Feb. 25 about the results of a referendum held in Okinawa Prefecture the previous day. (Takeshi Iwashita)

“We will take the results seriously and will do our best to reduce (the prefecture’s) burden of hosting U.S. military bases,” Abe told reporters at the prime minister’s office in Tokyo. “(But) we can’t postpone (the relocation) any longer.”

The new base will be built off the Henoko district of Nago to take over the functions of the U.S. Marine Corps Air Station Futenma located in a crowded residential area in Ginowan, also in Okinawa Prefecture.

The return to Japan of the land where the Futunma air station is located, and the relocation of its functions, was agreed upon by Japan and the United States in the 1990s. However, Okinawa residents and politicians have demanded that the functions be moved outside of their prefecture, which is currently home to about 70 percent of U.S. military facilities in Japan.

“We want (the people of Okinawa Prefecture) to understand that the relocation is not only intended to construct a new base off Henoko but also to transfer the functions of the Futenma air station and realize the return (of its land to Japan),” Abe said.

In the Feb. 24 prefectural referendum, 72.15 percent of voters opposed the land reclamation work off Henoko, 19.10 percent supported the project and 8.75 percent had “no opinion either way.” The results of the vote are not legally binding.

Defense Minister Takeshi Iwaya on Feb. 25 echoed the sentiments of the prime minister.

“We want to proceed with the (land reclamation) work,” Iwaya said.

On the night of Feb. 24, the ruling Liberal Democratic Party issued a statement under the name of Fumio Kishida, chairman of the party’s Policy Research Council.

“We will take the results of the voting seriously,” the statement said, adding that relocation work would proceed regardless of the outcome. “We want to make our utmost efforts so that the work can obtain the understanding and cooperation from the people of the prefecture.”

Chief Cabinet Secretary Yoshihide Suga has said the original point of the relocation issue is to remove the dangers of the Futenma air station from the crowded area of Ginowan and have the land returned to Japan.

“Our idea of proceeding with the work remains unchanged,” he said.

Even before the official campaign kicked off for the referendum, Suga had repeatedly cast doubts on the purpose of the vote.

“Discussions aren’t being made on what should be done to prevent the Futenma air station from staying at its current site forever,” he said.

The referendum asked voters whether they supported the land reclamation work off Henoko instead of whether they approved the relocation of the Futenma air station.

A senior central government official also said that a referendum that didn’t ask voters about the pros and cons of the Futenma relocation was meaningless.

However, such criticism will likely fuel sentiment in the prefecture that the central government is continuing to ignore the will of the Okinawa people.

The central government has also failed to live up to its promise to the Okinawa prefectural government that operations at the Futenma air station would be halted within five years from mid-February 2014.

In fact, the central government still cannot show a schedule for when the Futenma operations will stop, and its emphasis on prioritizing safety in Ginowan is also falling flat.

It has been learned that the Defense Ministry started preparations to expand the land reclamation work off Henoko to deal with soft ground in wide areas of the seabed.

With the expanded work, the relocation project is expected to take many years to complete.

In his policy speech in 2018, Abe said, “We will side with the feelings of the Okinawa people and do our best to reduce the prefecture’s burden of hosting (U.S. military) bases.”

In his policy speech this year, however, he deleted the words “side with.”

Over the year, Okinawa Prefecture has strengthened its opposition to the Futenma relocation plan by, for example, electing anti-base candidate Denny Tamaki as governor in September.

A by-election in the Lower House Okinawa No. 3 constituency is scheduled for April while the Upper House election will be held in summer.