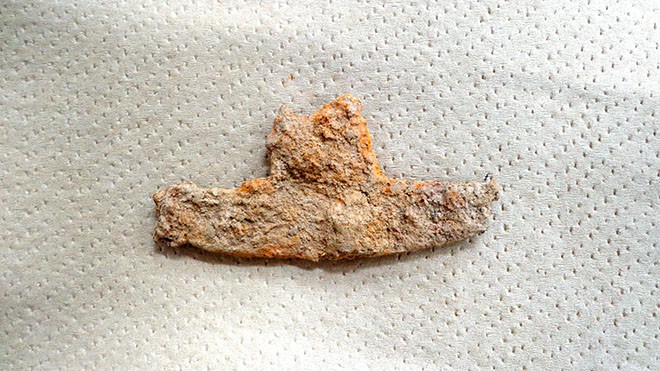 The anchor-shaped metal object uncovered from the Sugu ruins in Kasuga, Fukuoka Prefecture (Provided by the Kasuga city board of education)

KASUGA, Fukuoka Prefecture--An anchor-shaped object found by a group of researchers here may provide a clue to exchanges between Japan and neighboring nations during the Yayoi Pottery Culture period (300 B.C.-A.D. 300).

The metal object, found in the Sugu ruins excavation site, is believed to have been made around 100 to 200 A.D.

At that time, Kasuga was a central part of what ancient Chinese history refers to as Nakoku in "Wei Zhi," which contained an extensive account of areas that now make up Japan.

According to Kasuga city officials, the latest discovery came during a 2016 dig of a ruin believed to have been a grave. The object measures 8 centimeters by 4 cm and is about 0.5 cm thick.

While similar objects have been found in what are believed to have been graves in the southeastern part of the Korean Peninsula, no such object has been found in Japan until now.

While experts do not know the exact use of the object, there is speculation that it was some sort of tool that a horse carriage operator used to attach the reins to his hip.

Junichi Takesue, an archaeology professor at Fukuoka University who has done extensive research on ancient history of the Korean Peninsula, said the latest find is an important material that shows those who used to live in the area of the Sugu ruins had extensive exchanges with nations that were in control of the southeastern part of the Korean Peninsula.

Nakoku is believed to have been a major presence in the Fukuoka plain during the Yayoi Pottery Culture period. Another ancient Chinese history text has an entry that the king of Nakoku received a gold seal from the Chinese emperor in the year 57. That relic was found during the Edo Period (1603-1867) in what is now the Shikashima district of Fukuoka city.