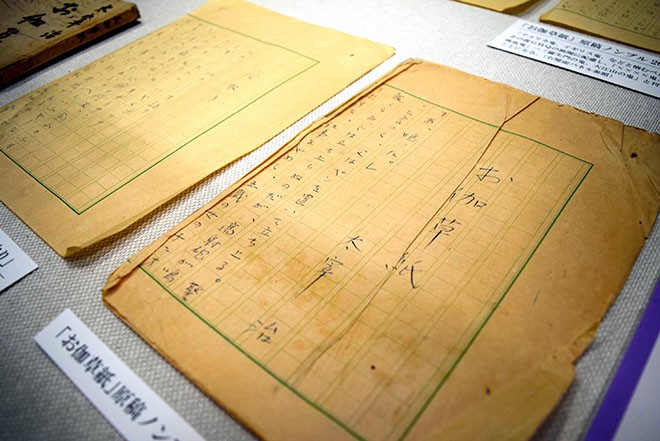 When celebrated author Osamu Dazai was working on his collection of fairy tales in the waning days of World War II, he wrote about American and British "devils."

But when "Otogizoshi" first appeared in book form in October 1945, those references to the two main combatants during the war with Japan had been purged, so his readers were none the wiser.

A complete manuscript for his work now shows the true picture of what he intended for a book that has been translated into English as "Otogizoshi: The Fairy Tale Book of Dazai Osamu."

The manuscript includes all four stories based on traditional Japanese fairy tales, such as "Kobutori" (Lump remover) and "Shitakiri Suzume" (Tongue-cut sparrow), in addition to the preface.

Hiroshi Ando, a professor of modern Japanese literature at the University of Tokyo, called the discovery of the manuscript more than 70 years after the work was first published as "epoch-making."

"The rewriting process symbolizes the confusion in Japan during and after World War II," he noted.

The manuscript had been in the possession of a private collector for many years.

In the preface of the manuscript, Dazai (1909-48) writes that he came up with the idea for the work after reciting fairy tales to his 5-year-old daughter after they fled to a bomb shelter.

The Kobutori tale originally included the references to American and British devils. But the nationalities were dropped, and only the word "devils" remained in the first publication.

In the subsequent edition that appeared in February 1946, those devil references were substituted with "murderers" and "vampires."

The original tale is about how two old men, one good and one bad, try to convince ogres to remove lumps from their foreheads.

Dazai evacuated to Kofu, the capital of Yamanashi Prefecture, from his home in the capital after the Great Tokyo Air Raid in March 1945.

However, Kofu was also fire-bombed and Dazai was forced to flee his burning home while clutching his cherished Otogizoshi manuscript.

The Museum of Modern Aomori Literature also possesses a different manuscript of the preface and Kobutori.

Ando said they were likely the revised versions that Dazai made after brushing up the newly discovered manuscript. Dazai may have had plans to submit the manuscript now in the museum for magazine publication.

The complete manuscript went on display from April 6 at the Museum of Modern Japanese Literature in Tokyo as part of an exhibition commemorating the 110th anniversary of Dazai's birth. The exhibition will run until June 22 and also features the manuscripts of other famous Dazai works, such as "The Setting Sun" and "No Longer Human."