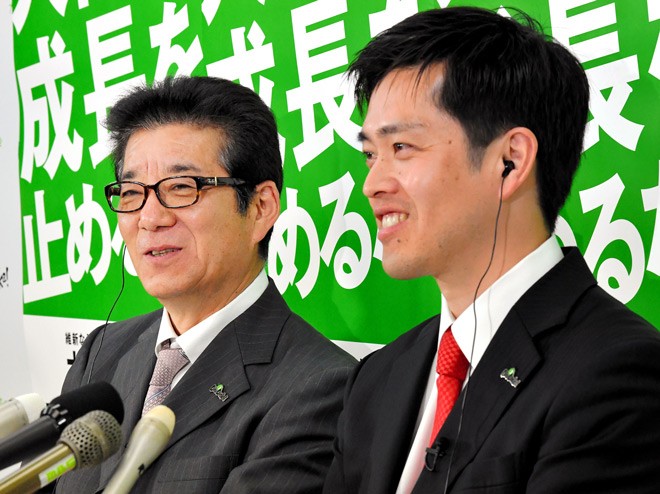 Ichiro Matsui, left, and Hirofumi Yoshimura hold a news conference in Osaka on April 7 after they clinched victory in the Osaka mayoral and gubernatorial elections. (Sayuri Ide)

Yoshimura won the gubernatorial election, with 2,255,022 votes, while Matsui triumphed in the mayoral election with 651,969 votes. Their nearest challengers garnered 1,253,514 votes and 473,566 votes, respectively. Ninety-nine percent of the ballots had been counted.

“I want to make a fresh start to realize our project to merge the two governments,” said Yoshimura, 43, after his win became certain on the night of April 7.

Matsui, 55, said he will proceed with the merger project in a careful manner, while listening to opponents’ views.

The two leaders had resigned from their respective posts on March 8 to run for each other's positions in an attempt to gain full four-year terms, rather than face the end of their original terms later this year.

Their project to create a new Osaka metropolitan government was further buoyed by the results of the prefectural assembly election on the same day in which Osaka Ishin no Kai members captured more than half the seats there.

But candidates affiliated with Osaka Ishin no Kai could not gain a majority in the municipal assembly election despite capturing more seats than they previously held.

The outcome of the polls delivered a blow to the ruling Liberal Democratic Party and its coalition partner, Komeito, which together endorsed Tadakazu Konishi and Akira Yanagimoto in the gubernatorial and mayoral elections, respectively.

The figure for the mayoral election was 52.7 percent, compared with 50.51 percent in the last election four years ago.

Yoshimura and Matsui plan to hold a new referendum on their proposal for creating a metropolitan government during their terms. Voters previously rejected a referendum that would have reorganized the Osaka city government into a large metropolitan entity in 2015.

To make a new referendum a reality, they need approval from prefectural and municipal assemblies.

The double elections were triggered by the failure between Osaka Ishin no Kai and Komeito over when to hold a referendum.

During their campaigns, Yoshimura and Matsui underscored their orchestrated efforts to successfully bring the World Expo to Osaka in 2025.

In Hokkaido, Naomichi Suzuki won the gubernatorial election in a landslide, becoming the youngest governor ever in the nation at 38.

Suzuki, former Yubari mayor, was endorsed by the ruling coalition, as well as New Party Daichi, a Hokkaido-based party.

Suzuki, who is from Saitama Prefecture and a former employee of the Tokyo metropolitan government, was credited with charting a course for rebuilding of Yubari, a bankrupt municipality, under his leadership as mayor.

“Based on the trust I have built with the central government, I want to turn Hokkaido into the land of dynamic activities,” he said after he won the race.

Ishikawa's crushing defeat bolsters the prospects of the LDP as it faces a pivotal Upper House election this summer. Hokkaido is known as a district where opposition parties have fared relatively well in past elections.