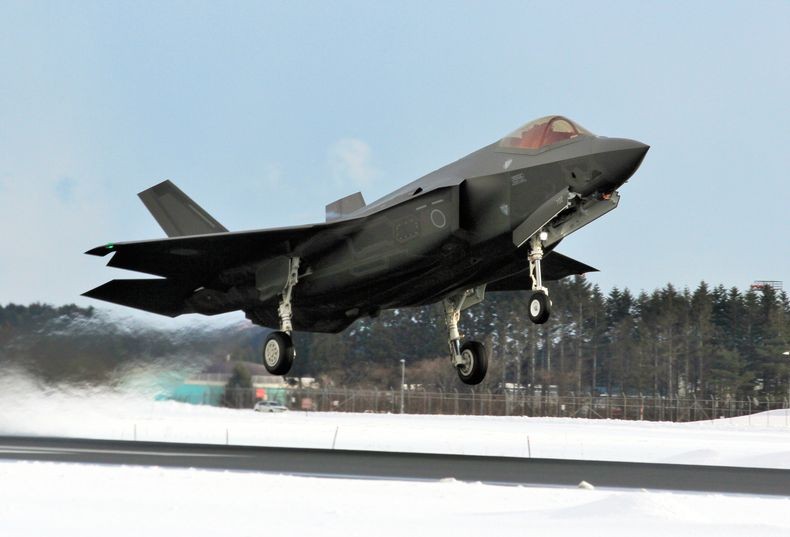 An F-35A fighter jet takes off from the Air Self-Defense Force's Misawa base in Aomori Prefecture in January. (Asahi Shimbun file photo)

A search was underway for a Japanese fighter jet Tuesday after it disappeared from radar during a flight exercise in northern Japan, defense officials said.

The F-35A stealth jet went missing while flying off the eastern coast of Aomori, the Air Self-Defense Force said. The plane disappeared from radar about half an hour after taking off from the Misawa air base with three other F-35As for anti-fighter battle training, it said.

Defense Minister Takeshi Iwaya told reporters that a search and rescue operation was underway for the missing jet and its pilot. The cause of the plane's disappearance was not immediately known.

A male pilot in his 40s was missing with the plane, Iwaya said. He said 12 other F-35s at the Misawa base would be grounded.

Japan has started deploying the expensive U.S.-made F-35s since last year, part of its plan to bolster its defense spending and weapons capability in the coming years to counter potential threats from North Korea and China.

Under the guidelines approved in December, Prime Minister Shinzo Abe's government plans to buy 147 F-35s, including 105 F-35As, with a price tag of about 10 billion yen ($90 million) each.