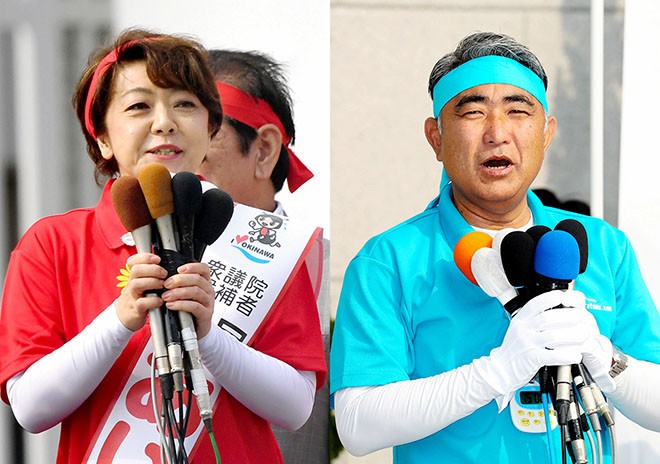 Aiko Shimajiri, left, and Tomohiro Yara campaign on April 9 in the by-election for the Okinawa No. 2 district. (The Asahi Shimbun)

Official campaigning began on April 9 in two Lower House by-elections that are a harbinger for this summer's Upper House election as both races pit candidates from the ruling coalition and opposition parties.

The by-election in the Okinawa No. 3 district was called after Denny Tamaki resigned the seat in his successful bid for Okinawa governor in September.

Tomohiro Yara is backed by the opposition parties that served as the main force that swept Tamaki into the governor's office.

The district is home to Nago, where land reclamation work continues at the Henoko district to relocate U.S. Marine Corps Air Station Futenma from Ginowan, also in Okinawa.

The ruling coalition is backing Aiko Shimajiri, a former Upper House member who was defeated three years ago even though she served as state minister for Okinawa and Northern Territories affairs.

The other by-election for the Osaka No. 12 district was necessitated following the death of the previous seat holder, Tomokatsu Kitagawa, of the ruling Liberal Democratic Party.

The LDP is backing Shinpei Kitakawa, a nephew of the deceased lawmaker.

In a rare move, Takeshi Miyamoto, a sitting Lower House member of the Japanese Communist Party, resigned his seat and is running as an independent in the hope that other opposition parties will coalesce around his candidacy.

The results will be watched closely by all the opposition parties as there are plans afoot to back a single candidate in the single-seat prefectural districts in the Upper House election.

Complicating matters in Osaka is the presence of Nippon Ishin (Japan Innovation Party), which is running its own candidate in the by-election, Fumitake Fujita.

Osaka Ishin no Kai showed it still wielded huge influence in Osaka as the party's candidates swept the gubernatorial and mayoral races over candidates backed by the ruling coalition on April 7.

The fourth candidate in the Osaka by-election is Shinji Tarutoko, who formerly served as minister of internal affairs and communications when the Democratic Party of Japan was in control of government.

Voting in the two by-elections will be held April 21.

(This article was written by Natsuki Okamura and Taro Nakazaki.)