EDITORIAL: Society as a whole must act to combat threats to free speech 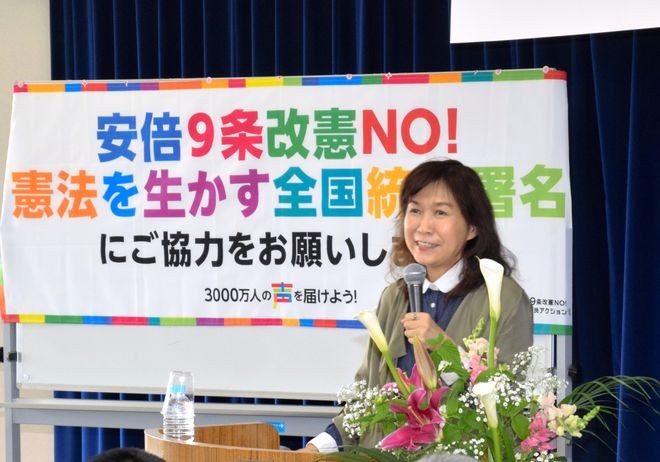 In this April 22, 2018, file photo, Rika Kayama speaks about the importance of the pacifist Constitution in Iga, Mie Prefecture. (Asahi Shimbun file photo)

People’s inherent and indisputable right to think and speak freely must never be restricted without good reason.

From time to time, Asahi Shimbun editorials have taken up the issue of disturbing attacks on the nation's democratic principles, which have continued unabated.

In November, for instance, the city of Nantan in Kyoto Prefecture canceled a scheduled lecture meeting featuring psychiatrist Rika Kayama after it received phone calls threatening to disrupt the event and warnings of protest street rallies using loudspeaker vans from political organizations.

The canceled lecture's theme was “To Enrich the Minds of Children.” The municipal government changed the lecturer, citing the need to protect the safety of mothers and their children who would attend the event.

The authorities there should have stood resolutely against these blatant acts of harassment.

They could have taken sufficient measures to protect the audience, including asking for police protection.

It should also be noted that a Supreme Court ruling declared a similar action taken by a local government in a similar situation to be illegal. It is a pity that Nantan effectively succumbed to unjustifiable pressure on free speech.

In 2017, Kayama’s scheduled lecture meeting in Tokyo was canceled under similar circumstances. At that time, Kayama, who has a reputation for speaking out against discriminatory behavior, was facing fierce verbal attacks on the Internet. The acts of harassment to sabotage the event in Nantan also seem to be driven by hatred toward Kayama’s activities.

These are not the only cases of hatred-driven acts threatening free speech. There have also been numerous cases in which local governments withdrew their support or co-sponsorship for meetings to discuss issues concerning the Constitution or military bases.

Local governments ought to be more aware of their responsibility to guarantee freedom of speech and protect diversity in views and opinions.

Hate speech targeting specific persons or groups, of course, cannot be described as a healthy expression of views and opinions.

Let us reconfirm that the freedom of speech guaranteed by the Constitution is conditioned by the requirement that the dignity of any individual should not be damaged.

There have also been other detestable forms of harassment. Some local assembly members and lawyers who have been vocal in talking about such issues as gender discrimination have received the deliveries of items they had not ordered.

Since last summer, cash-on-delivery parcels containing underwear and other items have been sent to Satoko Murakami, a member of the Kitakyushu municipal assembly. This apparent harassment started after she presided over a lecture meeting featuring Kihei Maekawa, a former administrative vice education minister who bitterly criticized the administration of Prime Minister Shinzo Abe over the political scandal involving the Kake Educational Institution.

Murakami says she senses a desire to “suppress free speech” in the acts of harassment against her. “I will never be deterred by such acts from saying what I want to say,” she adds.

Sadly, some people deride such voices. Social media have been flooded with vicious comments about Murakami’s remarks, such as, “What’s the point of advertising yourself as a victim?”

It is terrifying to know that you can become a target of such acrimonious verbal attacks when you voice opposition to discrimination, criticize the administration or argue the importance of the Constitution.

We are concerned that the public space of free speech could be narrowed by a vicious cycle in which the fear of being targeted deters people from speaking out, creating further incentives for attacks.

To prevent this harmful trend from growing, we need to keep criticizing such behavior steadily, if not loudly, while using our imaginations to ponder the possibility that we could also become targets at any time.