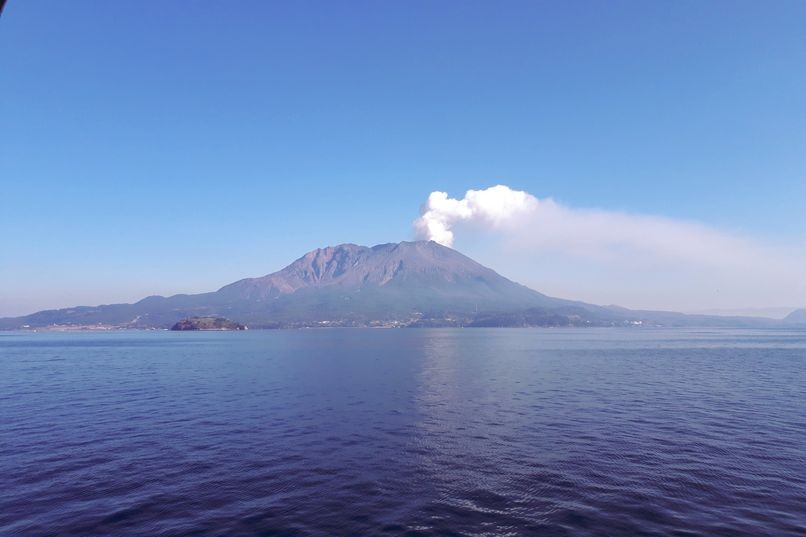 The geological processes that led to three giant eruptions of Mount Sakurajima over the past five centuries differ significantly from the series of small-scale "burps" that are occurring now, scientists say.

Researchers from Tohoku University and elsewhere said the historic eruptions appear to have occurred shortly after magma ascended to shallow depths of just 1 to 3 kilometers below the surface.

Mount Sakurajima, one of the nation's most active volcanoes, is located in Kagoshima Bay and is part of the city of Kagoshima.

The research team was headed by Michihiko Nakamura, a professor at Tohoku University whose specialty is studying the composition of rocks.

The team members analyzed the chemical composition of pumice spewed out during the three eruption events.

They focused on the size of mineral crystals in the magma, as well as the water content of the magma trapped during the mineral growth process, to estimate the final level where magma built up to cause a massive eruption.

The study showed that the magma accumulated temporarily at a very shallow location, just 1 to 3 kilometers below the surface, and it took a relatively short time for the magma to rise to the surface, causing the eruptions.

It was previously believed that magma must have shot up directly from a main magma reservoir assumed to be located at a depth of about 10 km.

The researchers also found that fewer mineral crystals formed in the giant eruption episodes compared with the small-scale eruptions that have occurred frequently in recent years. That led them to conclude the magma likely gushed out fairly quickly.

Nakamura noted that it likely takes only several hours, or even less, for magma to erupt once it has risen to shallow depths ahead of large-scale eruptions, whereas it takes several days or weeks in the case of small-scale eruptions.

Measurements of crustal deformations indicated the main magma reservoir that feeds Mount Sakurajima lies about 10 km below the surface in the northeastern part of Kagoshima Bay.

Roughly the same volume of magma that erupted during the Taisho event just over a century ago has likely already accumulated there, prompting experts to warn that another large-scale eruption could occur in the near future.

“The next giant eruption event could follow the same process of the past three major episodes,” Nakamura said. “It is essential to keep monitoring the volcano with a focus on magma ascending to shallow depths.”

The research results were published in Scientific Reports, a British science journal.