EDITORIAL: Japan’s stealth fighter program should be put on ice after crash 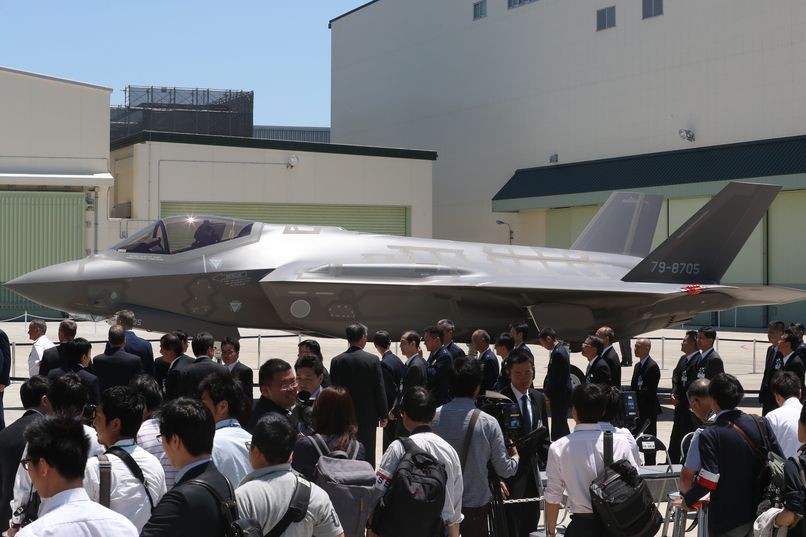 An F-35A stealth fighter jet is shown to the news media in June 2017 at Mitsubishi Heavy Industries Ltd. Komaki South Plant in Aichi Prefecture. It was the first F-35A assembled at the plant for the Air Self-Defense Force, and the one that crashed off Aomori Prefecture on April 9. (Asahi Shimbun file photo)

The recent crash of an Air Self-Defense Force F-35A advanced stealth fighter jet has raised the question of whether Japan should continue buying more of these costly warplanes from the United States.

The government should put its purchase plan on ice for the time being and focus on clearing up the cause of the serious accident as the top priority.

One week has passed since the F-35A, which belongs to the ASDF’s Misawa air base in Aomori Prefecture, crashed into the Pacific during a training exercise. The pilot is still missing, and only parts of the plane’s tail have been found despite large-scale search operations involving the Self-Defense Forces and the U.S. military.

The F-35s, developed and made by U.S. defense contractor Lockheed Martin Corp., boast high-level stealth and electronic warfare capabilities. The ASDF plans to make the F-35 its next-generation mainstay fighter.

The plane that crashed cost some 14 billion yen ($125 million). An F-35B variant, which can take off in a short distance and land vertically, crashed in September last year in the United States. But the accident off the eastern coast of Aomori Prefecture was the first crash of an F-35A conventional takeoff and landing model.

The plane’s missing male pilot, a 41-year-old ASDF major, was a veteran with about 3,200 hours of flight experience including about 60 hours of flying an F-35A. He was the formation leader of four F-35As in the exercise.

To determine the cause of the accident, the government should keep all possibilities in mind without making any prejudgment. Possible causes include mechanical problems with the aircraft, such as an engine problem, abnormal conditions of the pilot, such as spatial disorientation, or the inability to determine one’s true body position, motion and altitude relative to the environment, and a human error factor.

The plane was assembled and completed at Mitsubishi Heavy Industries Ltd.’s Komaki South Plant in Aichi Prefecture. It made two emergency landings in 2017 and 2018 due to mechanical troubles.

The body of the crashed plane is believed to have sunk to the seabed 1,500 meters beneath the surface.

The investigation into the accident will pose formidable challenges. Since the aircraft is chock-full of U.S. military secrets, it is unclear whether Japan will be able to sufficiently participate in the analysis of the wreckage, even if it can ever be recovered.

The government hopes to retrofit the Maritime Self-Defense Force’s Izumo-class helicopter-carrying destroyers into effective aircraft carriers with an eye to operating F-35B fighter jets out of the vessels.

At a news conference last week, Defense Minister Takeshi Iwaya said the government has no intention at the moment to change the plans to purchase and deploy these advanced stealth fighters.

If, however, any technological flaw in the aircraft is discovered, the government will have no choice but to make a radical review of the program.

In the event the investigation will continue for a long period, there will also have to be a major revision to the program. In a report released in June last year, the U.S. Government Accountability Office (GAO), a congressional agency, said the F-35 has 966 “open deficiencies.”

The Defense Ministry has said the U.S. government claims there is no problem with the aircraft. But it seems to have simply taken Washington’s claim at face value.

U.S. President Donald Trump has demanded that Japan buy massive amounts of U.S. weapons including the F-35. But the issue concerns the very foundation of Japan’s defense policy and the lives of SDF personnel.

The government should not proceed with the F-35 program simply because it has already made the decision.

The first test of Tokyo’s response to the accident will come later this week, when the top foreign and defense policy officials of the two governments will hold talks in a “two plus two” meeting.

They need to agree to set up a system for effective bilateral cooperation in the efforts to determine the cause of the F-35 crash.