A "karakuri" mechanical doll dances and other floats parade around while a lion dance is performed and musicians march in Takayama, Gifu Prefecture, on April 15. (Yoichi Kawatsu) 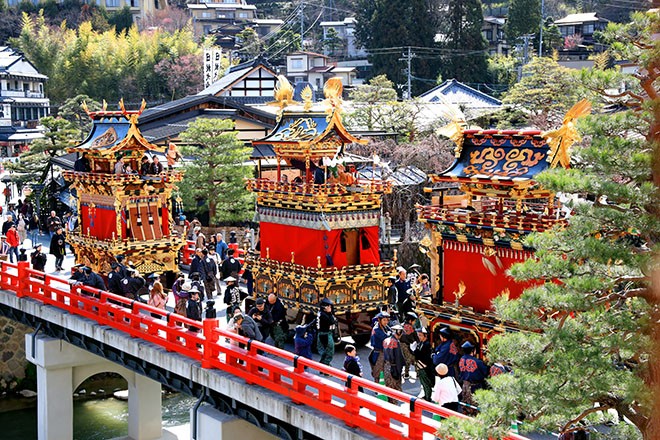 Takayama Festival’s signature high floats parade along the famed Nakabashi bridge heading for the venue for the performance of "karakuri" mechanical dolls in Takayama, Gifu Prefecture, on April 15. (Yoichi Kawatsu)

TAKAYAMA, Gifu Prefecture--A "karakuri" mechanical doll is perched precariously on what resembles a diving board jutting from the top of a towering parade float.

He waves a fan and flower petals fall to the crowd.

The Spring Takayama Festival reached its finale here on April 15, with a performance of the delicate wooden dolls, whose jerky movements are manipulated by people pulling strings inside the floats.

Numerous spectators snapped photos to capture the last Heisei Era (1989-present) edition of the two-day festival here, which featured lavishly decorated floats and a parade moving around the town.

The time-honored festival, held in spring and autumn, is one of the 33 “Yama, hoko, yatai float festivals in Japan,” collectively registered on UNESCO’s Intangible Cultural Heritage list in December 2016.

Unfortunately, it was raining on April 14, Day 1 of the biannual festival. But those who turned out for the event were blessed with perfect weather the following day.

Holidaymakers were enchanted by the approximately 7-meter-high floats adorned with exquisite sculptures, fabrics and lacquer crafts.

The Special Exhibition of Takayama Festival Floats, where all 21 floats for both the spring and autumn festivals will appear in the city, is scheduled to take place on May 1 to mark the start of the new imperial era, Reiwa.