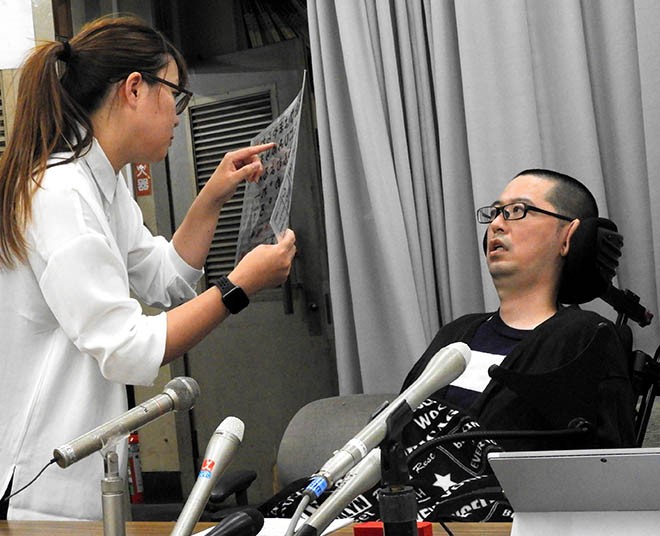 Yasuhiro Takada, right, communicates via a special pad at a news conference in the Saitama prefectural government office on April 16. (Kazuki Ogasawara)

SAITAMA--A 43-year-old man with motor neurone disease accused a city welfare official here of making light of his disability during an interview at his home to assess his care needs.

Yasuhiro Takada, a resident of Yoshikawa in the prefecture, suffers from amyotrophic lateral sclerosis (ALS), also known as Lou Gehrig's disease, which causes weakness and shrinkage of the muscles.

Takada is unable to move and only able to communicate via a special pad held up by a carer. Carers spend 50 hours a month making home visits.

Takada, assisted by his lawyer, explained during a news conference at the prefectural government office on April 16 that he requested city authorities in May 2018 to increase the service hours.

On April 12, three employees from the city’s disability welfare division visited Takada’s home for the first time to check on his situation and assess whether the request should be granted.

According to the conversation recorded by a lawyer who was present, Takada was asked, “Can you roll over onto your other side by yourself?”

Takada, who is unable to vocalize or move a muscle, attempted to answer through a communication board that tracks his eye movements.

One of the officials then said, “Is it a stalling tactic?”

The lawyer said he protested immediately, but the official did not apologize.

“I was simply mortified,” Takada said at the news conference, using the communication board.

Takada, who mailed a statement of protest to the city, said the remark caused him emotional suffering.

His lawyer said the utterance was “derogatory to Takada’s personality.”

The city admitted the conversation took place, but asserted the intention was not to demean Takada’s disability. Rather, the remark was addressed to his lawyer.

Toshiaki Kato, head of the city’s disability welfare division, said the remark referred to the entire process that led to conducting an interview at Takada's home, "and was not about having a conversation through a communication board.”

“The wording itself was inappropriate,” Kato said. “I apologize for giving him the wrong impression.”

Kato said the city will discuss the submitted written protest and respond to Takada as soon as possible.