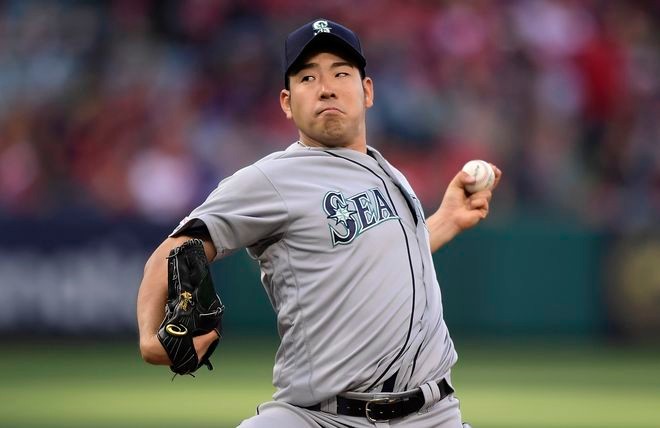 Seattle Mariners starting pitcher Yusei Kikuchi throws to the plate during the first inning of a baseball game against the Los Angeles Angels on April 20 in Anaheim, California. (AP Photo)

ANAHEIM, California--Albert Pujols was humbled after he caught and passed Babe Ruth for fifth place on baseball's career RBI chart.

Yet even the Los Angeles Angels slugger's 636th homer was no match for the Seattle Mariners' latest power display.

Pujols passed Ruth with an early RBI double and a late solo homer, but the Mariners added four more homers to their major league-leading total in a 6-5 victory over the Angels on Saturday night.

Pujols tied Ruth when he drove in Andrelton Simmons in the third inning, and passed the Babe by hitting the third homer of his 19th big league season in the ninth. Pujols has 1,993 RBIs, surpassing Ruth's total from the portion of his career after RBIs became an official statistic in 1920.

"It's pretty special," Pujols said. "You're talking about — if not the best, then one of the best — hitters to ever play this game. ... It would have been even sweeter if we would have come out with a win, but unfortunately it didn't happen."

The Angels couldn't follow up Pujols' one-out homer off Anthony Swarzak, who finished off his third save and Los Angeles' sixth consecutive defeat after the Mariners' power hitters staked them to an early lead.

"Cahill threw the ball really well against us back at our place," Mariners manager Scott Servais said. "We're seeing a lot of pitches and really making the pitchers work, and tonight we got to him."

Yusei Kikuchi earned his first major league win for the Mariners, persevering through five innings of 10-hit ball with plenty of help from his homer-happy teammates.

Kikuchi (1-1), who attended the same high school as injured Angels star Shohei Ohtani, finally won in his sixth start since joining Seattle in the offseason. His teammates doused him with a postgame beer shower to celebrate.

"For him to get that first win, it's huge for his confidence," Dee Gordon said. "He's pitched so well these last three or four games, and for him to come out tonight and lock in against a tough lineup, it's pretty cool."

Gordon delivered a two-run single for his 1,000th career hit in the fourth inning for the Mariners, who improved to 11-1 on the road with their third straight win in Anaheim. Seattle has scored 97 runs in those 12 road games while winning nine in a row to match the third-longest road winning streak in team history.

The Mariners already have the second-most homers in March and April in big league history, albeit with a head start from their March 20-21 series in Japan against Oakland and the March 28 start to the rest of the season. Only Mark McGwire's 2000 St. Louis Cardinals hit more homers before May, pounding out 55 in just 25 games — but those Cardinals hit 53 in their first 24 games, the same number as these improbable Mariners.

Seattle already set the franchise record for most homers in March and April by hitting four on Friday night, and promptly hit two more in the first inning.

Haniger connected on the third pitch from Cahill for the fourth leadoff homer of his career. Encarnacion chased Cahill in the fifth with his sixth homer.

Simmons had three hits, but the Angels couldn't keep up with Seattle's bats. Mike Trout went 0 for 4 with a walk and three strikeouts.