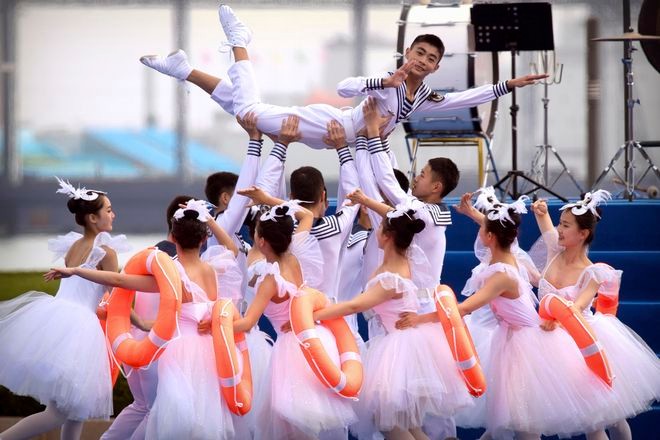 A Chinese military dance troupe performs during a concert featuring Chinese and foreign military bands in Qingdao on April 22, 2019. Ships from Chinese and foreign navies have gathered in Qingdao for events this week, including a naval parade, to mark the 70th anniversary of the founding of the People's Liberation Army (PLA) Navy. (AP Photo)

QINGDAO, China--The Chinese people love peace and countries should not threaten each other with the use of force, President Xi Jinping said on Tuesday as he kicked off a large-scale naval parade marking 70 years since the founding of China's navy.

Xi is overseeing a sweeping plan to refurbish the People's Liberation Army (PLA) by developing everything from stealth jets to aircraft carriers as China ramps up its presence in the disputed South China Sea and around self-ruled Taiwan, which has rattled nerves around the region and in Washington.

The navy has been a key beneficiary of the modernization plan, with China looking to project power far from the country's shores and protect its trading routes and citizens overseas.

Meeting foreign naval officers in the eastern Chinese city of Qingdao, Xi said the navies of the world should work together to protect maritime peace and order.

"The Chinese people love and long for peace, and will unswervingly follow the path of peaceful development," Xi added, in remarks carried by the official Xinhua news agency, after foreign reporters were asked by Xi to leave the room.

"Everyone should respect each other, treat each other as equals, enhance mutual trust, strengthen maritime dialogue and exchanges, and deepen pragmatic cooperation between navies," he added.

"There must be more discussions and consultations between countries, and there cannot be resorts to force or threats of force at the slightest pretext," Xi said.

Xi is expected to review the naval parade from sea later in the day, though it is unclear whether poor weather in Qingdao--with mist and driving rain--could affect the event.

The parade will feature 32 Chinese vessels and 39 aircraft, as well as warships from 13 foreign countries including India, Japan, Vietnam and Australia.

China has said it will display for the first time new nuclear submarines and warships.

China has frequently had to rebuff concerns about its military intentions, especially as military spending continues to scale new heights.

Beijing says it has nothing to hide, and invited a small number of foreign media onboard a naval ship to watch the parade, including from Reuters.

China's last naval battles were with the Vietnamese in the South China Sea in 1974 and 1988, though these were relatively minor skirmishes.