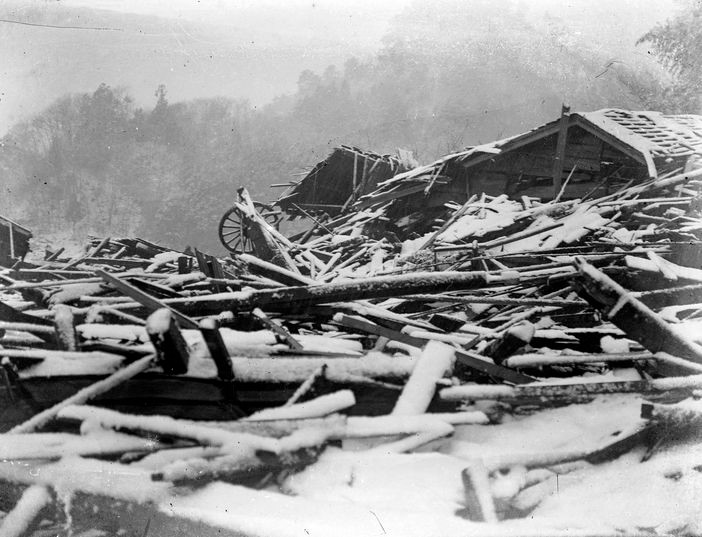 The roof of a collapsed house can be seen behind debris in the Taro district of Miyako, Iwate Prefecture, which was devastated by a tsunami spawned by the 1933 Sanriku Offshore Earthquake. (Provided by the Miyako city education board)

MIYAKO, Iwate Prefecture--Photographs of tsunami destruction in 1933 that were once believed lost forever in another tsunami that struck nearly eight decades later have been designated as tangible cultural properties.

The photos show collapsed houses and debris in Miyako’s Taro district after the area was devastated by the tsunami spawned by the 1933 Sanriku Offshore Earthquake.

“The photos are historic cultural assets because they are original images showing tsunami damage,” a Miyako city government official said.

Miyako city included the photos in its cultural property list, making them the first tsunami records to receive the status of a designated cultural asset.

The images were snapped by Juichiro Tsuda, a Taro resident, with glass dry plates.

Eleven of the 13 photos were taken on the day following the tsunami. Another one depicts the landscape of Taro a year earlier, while the remaining one was shot a year after the disaster.

Some of the images show accumulated snow on debris and affected residents.

The photos were kept in a safe in Tsuda’s home.

After he died, the tsunami triggered by the Great East Japan Earthquake in March 2011 swept away the house, along with the safe.

But the safe, which prevented damage to the images, was found in the rubble and sent to the Miyako Police Station. The photos were returned to Tsuda’s eldest son, Shigeo, six months after the disaster.

Shigeo, 78, who runs a clock shop in Taro and heads the local residents committee, said his father loved taking photos for pleasure.

In November last year, Shigeo sent a request to the city government, calling for construction of a facility housing a tsunami-themed museum and an evacuation shelter on the site of a municipal office in Taro that will be dismantled for relocation.

The images of the 1933 tsunami will be kept at the Sakiyama Kaizuka Jomon no Mori Museum for the time being. The municipality has yet to decide if the photos will be put on public display.

“The photos were once lost in the 2011 Great East Japan Earthquake and tsunami,” Shigeo said. “I want them to be passed down to posterity to show the history of the tsunami and its damage.”

Taro has often been hit by disaster from the sea.

The 1896 Sanriku earthquake generated a tsunami that killed 1,859 residents in Taro, or 80 percent of its population.

At 10 meters tall, the 2.4-kilometer-long structure was one of the largest double levees against tsunami in Japan and was sometimes likened to the Great Wall of China.