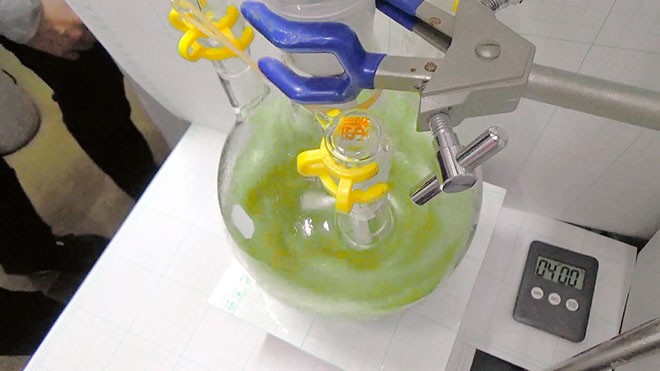 Ammonia accumulates in the upper part of a flask four minutes after the work to synthesize it began. (Provided by Nishibayashi Laboratory)

In a world first, a University of Tokyo team synthesized ammonia from water at ambient temperatures and atmospheric air pressure, cutting adverse effects on the environment involved in making the gas.

The research team, including professor Yoshiaki Nishibayashi, developed a method to synthesize ammonia by using water and nitrogen as raw materials.

“We want to put the method into practical use in 10 years,” Nishibayashi said.

The method was announced in the British science magazine Nature on April 25.

Ammonia is widely used as a raw material for such products as synthetic fabrics and chemical fertilizers. Its global production amounts to about 150 million tons per year.

Hydrogen, which is a fuel for fuel cells, can be extracted from ammonia. Ammonia has been called a fuel that could replace oil.

At present, ammonia is mass-produced in the Haber-Bosch method, in which it is synthesized from hydrogen gas and nitrogen gas at high temperatures (400 to 650 degrees) and under high pressure (200 to 400 atmospheres).

However, large amounts of energy are consumed in the process of producing hydrogen gas from natural gas. Carbon dioxide (CO2), which is a greenhouse gas, is also emitted.

Therefore, researchers are engaged in finding ways to synthesize ammonia that inflict less of a burden on the environment and are more efficient.

The University of Tokyo team succeeded in doing so using water as a raw material for ammonia.

The team devised a method of using a catalyst containing molybdenum, and a liquid samarium diiodide solution. When the researchers put the catalyst, the liquid solution, nitrogen gas and water into a container and mixed them, a large amount of ammonia was produced.

The exact mechanism of how this occurred has not yet been determined. However, the method does not require the production of hydrogen gas. The amount of emitted CO2 is also small.

To put the method into practical use, ammonia must be made efficiently. For that purpose, it is necessary to recycle the samarium compound. Samarium is a rare earth element that costs about 2,000 yen ($18) per kilogram.

The challenge is how to produce ammonia with less energy consumption. The team thinks that it will be possible by using electricity from renewable energies.

The researchers also said the team's method will be useful in developing small-scale equipment to make ammonia from water to use it for electricity generation at home.

If hydrogen becomes a common fuel source, ammonia can be used as a means to move it. Hydrogen is difficult to transport as is, but it can be pulled out of ammonia.

“It is a big progress to use water as it is as a source of hydrogen from the viewpoint of energy-saving,” said Hideo Hosono, honorary professor at the Tokyo Institute of Technology, who is also aiming to synthesize ammonia in a different method for industrial use.

“But a large amount of energy is necessary in order to recycle and use samarium diiodide. That will be a big challenge for industrial use,” he added.

(This article was written by Ichiro Matsuo, Toshihiko Katsuda and Takashi Sugimoto.)