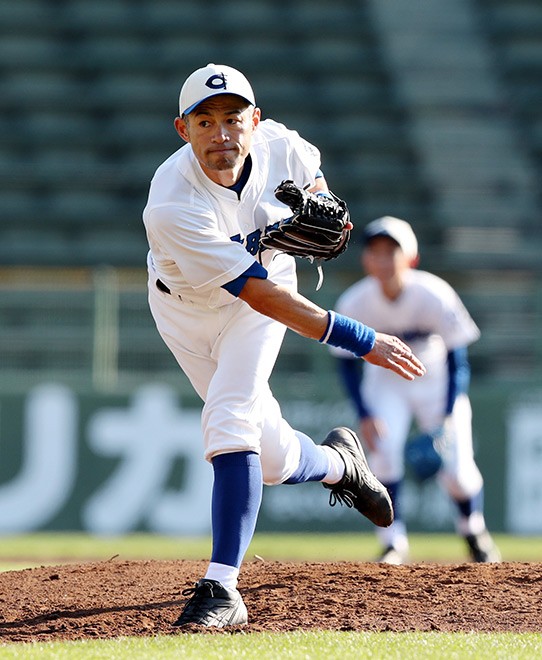 Ichiro Suzuki takes the mound as a starting pitcher in an amateur baseball game against a high school faculty team at Hotto Motto Field Kobe in Kobe on Dec. 1. (Takaharu Yagi)

KOBE--Like he did throughout his storied career, retired baseball great Ichiro Suzuki dominated again on the field, leading his team on Dec. 1 to a 14-0 shutout victory.

However, in this incarnation, Suzuki, 46, isn't coming out of retirement. Instead, he's having a good time on the mound as well as at the plate for an amateur baseball team he formed along with friends.

Fans were treated to the sight of Suzuki pitching a shutout and rapping out three hits, including a triple. On this day, he wore a uniform with the number 1.

When he went into his windup and pitched, spectators at the stadium shouted in amazement, “Wow, so fast!”

“I gave up some hits even though I pitched seriously,” he said. “I couldn’t have enjoyed it more. I would like to do this every year.”

When Suzuki was impressed at how the high school students and fans cheered on the Chiben Gakuen Wakayama team in the Kinki regional championship, he started communicating with them. When he and some friends formed an amateur baseball team called Kobe Chiben, they asked the school's faculty team to play a game together.

The stadium was opened to the staff and associates of both teams, along with about 150 graduates of the school's brass band club cheering on the teams. The school's famed cheering song, "Jock Rock," boosted the mood in the stadium.

“The graduates came to the stadium and cheered on Ichiro," said Chiben Gakuen Wakayama Principal Kiyoshi Fujita. "This was a good experience for them.”

Suzuki who started in the major leagues with the Seattle Mariners in 2001, also played with the New York Yankees and Miami Marlins, returning to the Mariners before retiring in March.

He left behind many records in both the major leagues and NPB.

In 2004, Suzuki broke the major league single-season hit mark with 262. He also became the first major leaguer to record 200 hits in 10 consecutive seasons.