Members of the 61st Japanese research expedition to Antarctica aboard the icebreaker Shirase prepare to depart from Fremantle Port, Western Australia, on Dec. 2. (Yumi Nakayama) 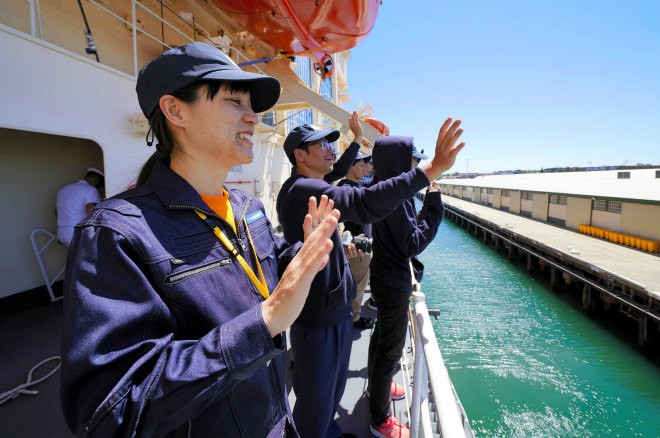 Members of the 61st Japanese research expedition to Antarctica wave to family members and well-wishers as the icebreaker Shirase departs from Fremantle Port in Western Australia on Dec. 2. (Yumi Nakayama)

The 138-meter vessel will drop off a wintering party that will spend 16 months at Japan's Syowa Station base and another that will spend the summer there and return in March.

The expedition is led by Shigeru Aoki.

Shirase stopped over at Fremantle Port, Western Australia, to take on 67 expedition members as well as load up on perishable foodstuffs and other supplies.

The ship is due to arrive at the station in early January after making a detour to the Totten Glacier for observations in mid-December.

Family members of the crew as well as well-wishers gathered at the dockside to bid farewell.

Crew members waved to them from the deck.

“Tears welled up in my eyes,” said Kota Muramatsu, a member of the wintering party who is in charge of electrical equipment.

Masato Yoshii, a crew member handling general affairs, said: “At last, we have reached the starting line. I must admit, I'm nervous.”