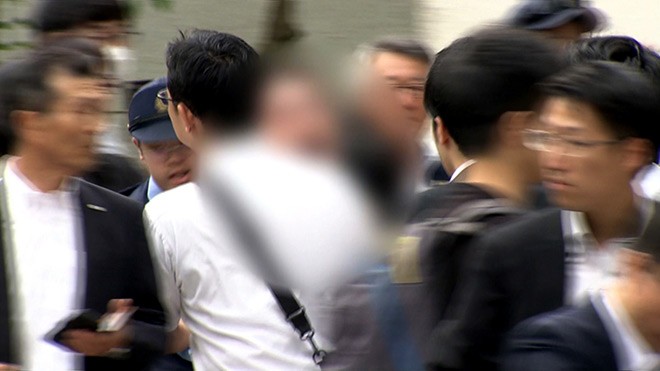 A man is removed by police after he jeered Prime Minister Shinzo Abe during his speech in Sapporo on July 15. (Provided by Hokkaido Television Broadcasting)

SAPPORO--A social worker has filed a criminal complaint and a lawsuit here, saying police abused their power by restraining him when he was jeering Prime Minister Shinzo Abe at an election rally.

The 31-year-old man said he was “assaulted” and had his rights violated when Abe was giving a speech in Sapporo on July 15 on behalf of a ruling party candidate running in the Upper House election.

“It is very dangerous if people can be arrested and detained when they voice their opposition,” the man said at a news conference here. “It would lead to a chilling effect on free speech.”

According to his complaints, the man shouted, “Abe resign,” and other words around 4:40 p.m. on July 15 during the prime minister’s speech in front of Sapporo Station. Several police officers immediately grabbed the man’s arms and other body parts and took him several dozen meters from the speech venue.

The man asserted that the actions by police were illegal and constituted abuse of police authority.

He said the officers had no legal basis to restrain or detain him.

In his lawsuit against the Hokkaido government, which has jurisdiction over the police, the man is demanding 3.3 million yen ($30,400), saying his freedom of speech was violated.

Police said they would not comment on the issue after the man filed the lawsuit. They had maintained they were checking what had happened.

According to the man, past court rulings define obstruction of speech under the Public Offices Election Law as acts that make it difficult or impossible for an audience to hear a speech. He said his jeering does not match that description.

Under the law governing police duties, officers can issue warnings and then restrain people who are suspected of legal violations. But the man noted that his jeering was not prohibited, so the police action against him was unjustified.

Several people who jeered and held up placards criticizing Abe and his policies at the same rally have said they were surrounded by police and removed from the venue.

(This article was written by Hiroaki Takeda and Kenji Izawa.)