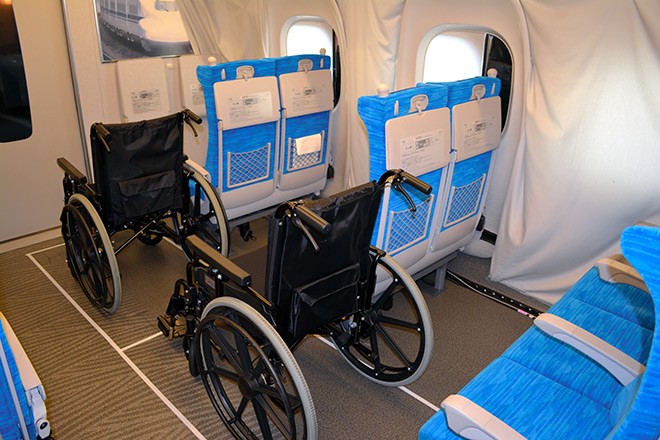 Passengers with disabilities who wish to use Shinkansen seats with wheelchair space can reserve them at a ticket counter or by phone up to a day prior to their train's departure, according to Central Japan Railway Co. and Kyushu Railway Co.

But anyone from the public can reserve those seats on the day of departure, reducing the chances of people with disabilities getting them.

Kimura, who has cerebral palsy and requires use of a large wheelchair, added, “A single train has only two seats with wheelchair space. The system should be changed so that only wheelchair users can buy those seats until the day the trains depart.”

Kimura was elected to the Upper House in July.

Shinkansen trains must have seats for wheelchair users to be in compliance with a transport ministry ordinance. Each train has one or two such seats.

According to East Japan Railway Co. (JR East), regular seats with wheelchair space are reserved for people with disabilities until the day the trains depart, but premium “green seats” must be reserved two days before the day of departure.

“It is an extremely shameful practice,” Akaba said. “I strongly suggest that JR listens to people with disabilities directly and review its operations.”