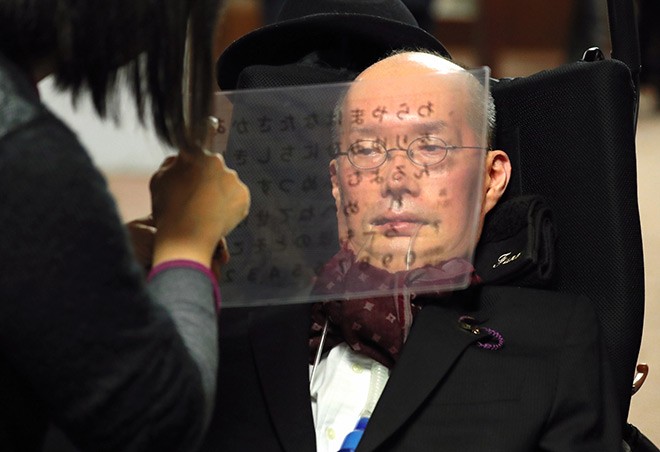 Upper House lawmaker Yasuhiko Funago, a member of the Reiwa Shinsengumi party, responds to reporters using a communication board after his first question at the Upper House committee on education and science in the Diet on Nov. 7. (Takeshi Iwashita)

An Upper House lawmaker with a neurodegenerative disorder criticized Prime Minister Shinzo Abe for mentioning that an employee in charge of shredding the long-sought guest list for an annual cherry blossom party has a disability.

"The employee's condition has no relation to the fundamental issue of the documents being discarded," said lawmaker Yasuhiko Funago, who has amyotrophic lateral sclerosis (ALS), in a statement Dec. 4.

"It's inappropriate that Abe talked as though it took a long time to shred them because of a disabled person. Also, it's regrettable that the comment could be interpreted as taking advantage of a non-regular employee's lower position."

Abe has faced growing criticism over the publicly funded parties, with many of his supporters and other influential politicians dominating the guest list.

The Cabinet Office has stated that it started shredding this year's list about one hour after receiving a request for the document from opposition lawmakers on May 9.

Abe said Dec. 2 at a plenary session of the Upper House: "The scheduled day for using the shredder was set on May 9 after checking its availability, as well as arranging the work hours of an employee who works less than a full day and with a disability who was in charge of the task."