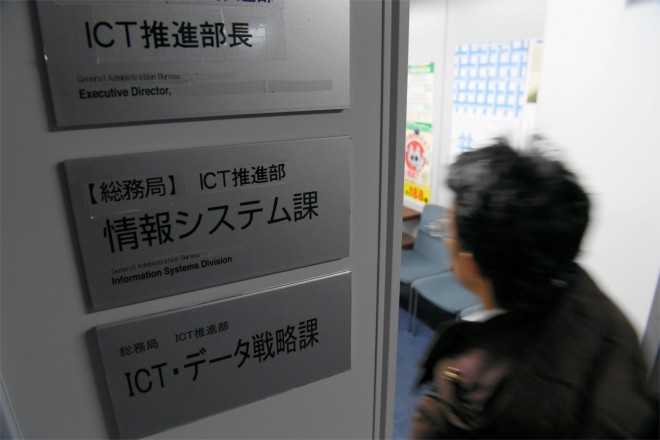 Employees of the Information Systems Division within the Kanagawa prefectural government enter their office on Dec. 6 to deal with the report about leaked public data. (Shinnosuke Ito)

An information equipment recycling company plans to file a criminal complaint against an employee whose reported sale of 18 prefectural government hard disks has raised concerns at the Defense Ministry and other clients.

Tokyo-based Broadlink Co. on Dec. 6 apologized for the data leak and said every effort would be made to “strengthen employee management and security rules to prevent a recurrence.”

Broadlink officials said they were considering having members of the data-wiping team pass through a metal detector when leaving the room. The company intends to report damages from theft to Tokyo police.

The Asahi Shimbun on Dec. 6 broke the story about the Broadlink employee who was supposed to have wiped all the data from the hard disks previously used by the Kanagawa prefectural government.

He told The Asahi Shimbun that instead, he removed the hard disks from a company facility and sold them through an Internet auction site.

The hard disks had only been reformatted so special software could easily restore the original data, which included personal information on Kanagawa residents as well as company information submitted to the prefectural government.

Broadlink’s website boasts that it has safely wiped data from more than 6 million hard disks. The website lists the Defense Ministry as one of its clients, along with major financial institutions and courts around Japan.

Broadlink said it had been conducting an internal investigation into the theft of the hard disks containing Kanagawa information and found that the employee in his 40s had also removed other hard disks from his workplace.

The employee was among a team of 20 to 30 workers tasked with wiping data from hard disks.

Entry into the room requires fingerprint recognition. Although small bags are allowed into the room, occasional spot-checks are made of their belongings when they enter and leave the room.

At a news conference on Dec. 6, Defense Minister Taro Kono said, “I have given instructions for a thorough investigation so that a similar incident" does not occur at the ministry.

Sanae Takaichi, the internal affairs and communications minister, said she would ask her subordinates to confirm the Asahi report.

“If it is fact, this is a very regrettable incident,” she said.