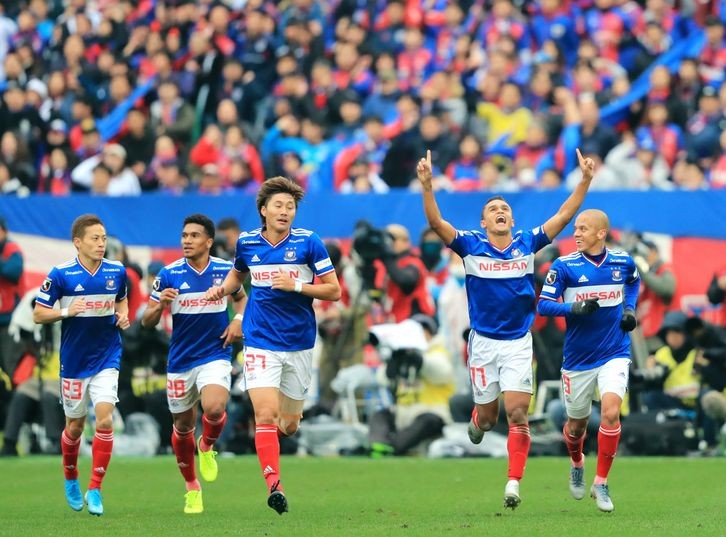 Brazilian forward Erik Lima of Yokohama F Marinos, second from right, reacts after scoring in the first half of the game against FC Tokyo to win their first J-League title in 15 years. (The Asahi Shimbun)

Marinos took the lead in the 26th minute when Thai defender Theerathon Bunmathan scored on a left-foot shot from 28 meters. The hosts doubled their advantage late in the first half on a goal by Brazilian forward Erik Lima.

Keita Endo sealed the win with an angled shot from close range in the 76th minute.

“We played successful football and the players deserved it,” said Postecoglou. “It was a special day for us, now I want to go celebrate."

FC Tokyo came into the last round of the season needing a victory by four goals or more for their first title but were unable to threaten Yokohama's solid defense, even after the hosts were reduced to 10 men in the 64th minute when goalkeeper Park Il Gyu was sent off after a verbal exchange with the referee.

Yokohama went into Saturday's final with a three-point advantage and a seven-goal lead in goal difference over second-place FC Tokyo.

The 54-year-old Postecoglou, a two-time A-League-winning coach with Brisbane Roar, turned Yokohama around after the club finish 12th in the 2018 season.

FC Tokyo lead for the majority of the campaign but Postecoglou's side finished with seven straight wins to deny Tokyo its first J-League title.

Elsewhere, David Villa scored in his last league game in Japan as Vissel Kobe beat Jubilo Iwata 4-1. The 37-year-old Spanish striker announced last month that he plans to retire when the season ends with the Emperor's Cup in January.