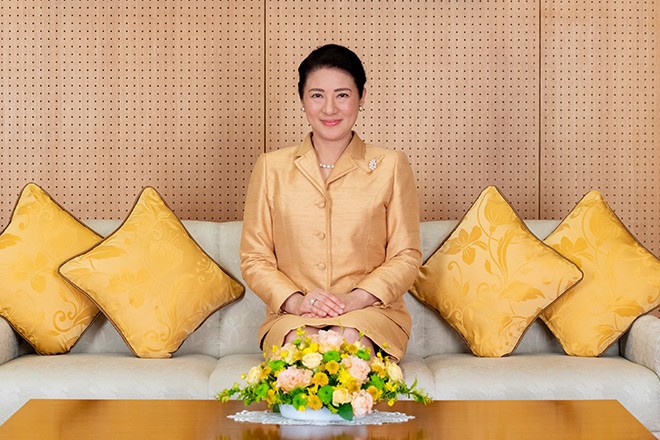 Empress Masako at her Akasaka Imperial Residence in Tokyo on Dec. 3 ahead of her 56th birthday on Dec. 9 (Provided by the Imperial Household Agency)

Empress Masako turned 56 on Dec. 9 and expressed her appreciation for the enormous encouragement shown by the public in celebrating her husband Naruhito’s ascension to the Chrysanthemum Throne.

In a statement released by the Imperial Household Agency to mark her birthday, Masako said she was touched by the outpouring of affection when she and other members of the imperial family greeted well-wishers gathered in front of the Imperial Palace in May and during the enthronement parade held in Tokyo in November.

“I have been gratified and thankful,” she said.

The empress said the smiles of the many people she met remain a treasured memory and are a huge source of moral support as she moves forward in life.

Referring to events in the past year that had pained her, the empress cited the large number of people affected by a string of typhoons and other natural disasters.

“I hope from the bottom of my heart that victims will be able to return to a life in which they can feel secure as early as possible,” Masako said.

The empress also expressed her determination to contribute to the happiness of people while supporting the emperor and striving to regain her health.

This was in reference to the stress-induced "adjustment disorder" she was diagnosed with 15 years ago that caused her to sharply curtail her public duties.

However, Masako made a big leap during the past year in this regard, according to the agency.

Her official visits to venues in Tokyo, including a nursery school in Minato Ward and a facility for senior citizens in Meguro Ward to coincide with Children’s Day and Respect-for-Senior-Citizens-Day, respectively, totaled 67 since her 55th birthday. The figure for the preceding year was 41.

The most notable perhaps was her participation in imperial rites. Although she did not attend any such rituals a year earlier, Masako attended seven rites this past year.

The Harvard-educated former diplomat made sure not to miss any of a series of ceremonies and events related to Naruhito’s enthronement since May 1.

They noted that she was visibly uplifted by the warm cheers she received from the public during visits to local regions to attend official functions and during the enthronement parade in November.

However, doctors cautioned against expecting too much from her now, stressing that Masako is still recuperating.

They said she made “enormous efforts to get herself in better physical shape with a slew of painstaking steps” to ensure she attended those rites and events. They said she did so with a strong sense of responsibility.

“Holding excessive expectations” for Masako could prove “detrimental” to her recovery, the doctors warned.