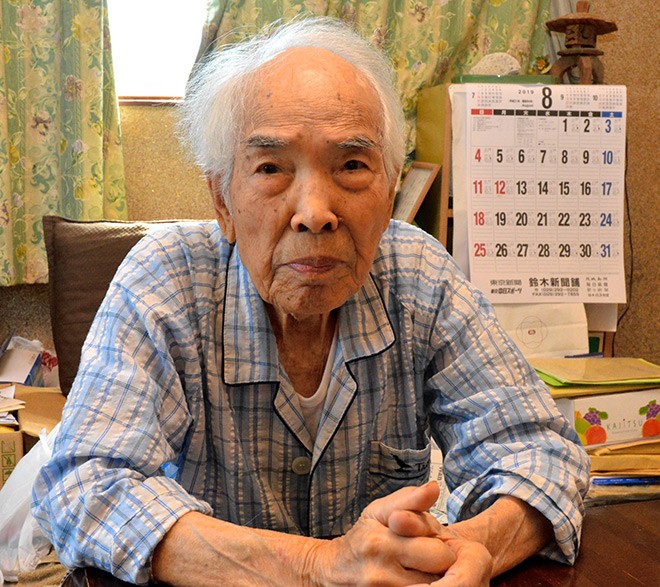 Keiji Nagai in August in Ibaraki town in Ibaraki Prefecture. The last survivor of the Battle of Peleliu passed away in November. (Mikio Kano)

IBARAKI, Ibaraki Prefecture--As Japan marked the 78th anniversary of the start of the war against the United States on Dec. 8, it mourned the passing of veterans such as Keiji Nagai during the year, who left behind a strong anti-war message.

Nagai, a former Imperial Japanese Army sergeant known as the last survivor of the 34 stragglers who returned from the Battle of Peleliu, died of bowel cancer on Nov. 4 in his hometown in Ibaraki Prefecture. He was 98.

“I am absolutely opposed to war,” said a bedridden Nagai, who had many scars from war wounds, in the final days of his life.

Nagai enlisted in the Imperial Japanese Army at the age of 18 in 1940. He joined the 2nd Infantry Regiment based in Mito in the prefecture.

After fighting in Manchuria for about four years, Nagai and his fellow soldiers were sent to the island of Peleliu in Palau.

After losing a series of battles on islands in the Pacific Theater, the Imperial Japanese Army faced a full-scale attack by the U.S. military there.

The Japanese troops waged a fierce battle to stop the U.S. forces from landing on the island from September 1944.

The battle raged on for 74 days, with approximately 10,000 Japanese soldiers being killed.

Nagai’s regiment hid out in caves to continue opposing the enemy. After they ran out of food, they staved off hunger pains for many days by eating hard and dry canned biscuits.

After their regiment was virtually destroyed, Nagai and his fellow soldiers hid out in scaffolding that they set up in mangrove trees.

They fished by day. At night, they snuck into an airfield controlled by the U.S. military and stole canned meat and sausages.

One of his comrades who could read English found printed material in a garbage dump.

“It seems that Japan surrendered,” he told his fellow soldiers.

But they couldn’t confirm the fact until much later.

Nagai and his 33 fellow soldiers returned to Japan in May 1947, about a year and a half after the end of the Pacific War.

Afterward, Nagai ran a Japanese-style confectionery store at his wife’s parents’ home in the town of Ibaraki. He was blessed with two children. He rarely spoke about his experiences in Peleliu in the presence of others.

Masao Hiratsuka, 82, a war history researcher who published a book on the Battle in Peleliu based on testimonies from the 34 survivors, said that his colleague asked Nagai for an interview more than 40 years ago, to which Nagai said no.

“He was not a simple soldier but a sergeant who led his subordinates,” Hiratsuka said. “I assume it wasn’t easy for him to talk.”

According to his fellow soldiers, Nagai remained opposed to surrender until the last moment, Hiratsuka said.

But Nagai’s hardened feelings changed in March 2015 when he was invited to meet then Emperor Akihito and Empress Michiko alongside Kiyokazu Tsuchida, an Imperial Japanese Navy seaman and fellow survivor of the ghastly battle and a straggler.

The imperial couple requested a meeting with them at the Imperial Palace before their commemorative visit to Peleliu and Palau to pray for the souls of the war dead the following month.

“I never would have guessed that I would talk with the emperor in my lifetime,” Nagai told people close to him at the time.

Since the meeting, Nagai started accepting interview requests from news media and visiting municipalities and schools to give lectures more than 10 times a year.

However, he was not always forthcoming about his wartime experiences.

Manga artist Kazuyoshi Takeda, 44, made an appointment for an interview and visited Nagai’s home two years ago.

Takeda was writing “Peleliu Rakuen no Guernica” (Peleliu: Guernica of Paradise) at the time.

However, Nagai refused to do the interview at the doorway. He posed the young cartoonist a rhetorical question: “Do you have experience in fighting in Peleliu?”

“I have responsibility for my 10,000 fellow soldiers,” the nonagenarian continued. “Let me be not part of your work.”

Takeda said Nagai told him that he didn’t like war-themed works such as manga, novels and films.

“I think Nagai questioned the fact that I, who don’t have firsthand knowledge of the cruelty of war, depict war through a cartoon and rejected my request for an interview,” Takeda surmised.

In recent years, 33 of the 34 survivors of the battle who hid out in the jungles of Peleliu until after the end of the war have passed away, in succession.

Nagai, the last survivor, spent his final days not only fighting cancer while bedridden, but also still battling the abhorrent memories of war.

When he dredged up memories of the war at night, he suffered from insomnia.

Nagai, however, welcomed a regular visit from Hiromi Hara, 41, of Ibaraki Prefecture.

Hara's grandfather was a soldier who fought with Nagai in the same regiment and remained in Peleliu without knowing that the war was over.

He never spoke with Hara about his experiences on the battlefield and in the jungle and died in 2000 at the age of 80. Hara, after seeing the imperial couple’s visit to Peleliu on TV, became interested in her grandfather’s war record and started communicating with Nagai.

In late August, Hara visited Nagai to interview him.

“I can’t sleep well when someone asks me about the past,” Nagai complained.

But once the interview started, he continued talking for about an hour and a half.

Nagai recalled seeing a heap of bodies piled upon bodies in front of him. He remembered fellow wounded soldiers screaming, “Kill me, please.”

He remembered the massive naval bombardment that completely destroyed all greenery on the island. He never forgot the glare of flare bombs lighting up the night sky.

He felt strongly about his anti-war resolve. When Nagai spoke about that while pointing at his wounded right leg, his speech grew rapid with indignation.

“I am totally opposed to the constitutional revision that will lead to sending young members of the Self-Defense Forces to war," he said. "Those politicians who want to make such revision should go to the war front and get shot.”

At the end of the long interview, Nagai murmured quietly, “I’m about to pass away.”

Once the people who have wartime experience are gone, “(we) will lose the knowledge of the soldiers’ world,” he said.

On the passing of her grandfather’s comrade in arms, Hara said, “I will keep telling what Nagai taught me.”