Lisa’s In and Around Tokyo: Kawagoe, a quaint merchant town with vibes of ‘Little Edo’ 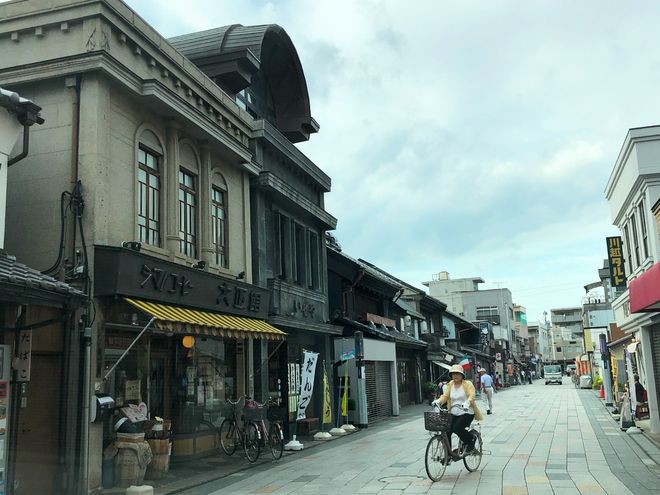 Taisho-Roman Street in Kawagoe is a place where visitors can enjoy the elegant atmosphere of early 20th-century Japan. (Photo by Lisa Vogt)

Kasumigaseki? That’s next to Nagatacho, where Japan’s movers and shakers do what they do to keep Japan humming along, right? No. It turns out that the golf venue for the 2020 Summer Olympics is Kasumigaseki Country Club in Kawagoe, Saitama Prefecture, which opened its fairways in 1929.

The city of Kawagoe has a public relations video geared toward overseas visitors called “Journey through space-time to Koedo Kawagoe.”

At first, I couldn’t fathom its meaning and thought it sounded like the subtitle of some sci-fi movie.

However, after visiting Kawagoe, I “get” it. One can wander back in time more than 1,000 years and then come forward in time to a more recent age, witnessing the various eras that make up Kawagoe’s history.

Kawagoe is complex and has it all. First, you must wrap your head around there being three train stations, none of them connected nor near one another. If you use the Seibu Line, you’ll arrive at Hon-Kawagoe, and if riding JR, it’s Kawagoe Station. On the Tobu Tojo Line, disembark at Kawagoe-shi Station, as it’s the closest to the old parts of town that you’ll want to visit. Whew!

Kawagoe is nicknamed “Koedo,” or Little Edo, because the town’s historic area has been preserved and retains an authentic Edo Period vibe. It is bona fide because it escaped bombing in World War II. So, the architecture is not a reconstruction of bygone eras. It’s the real McCoy.

In the Edo Period (1603-1867), Kawagoe prospered as a castle and merchant town that supplied commodities from afar to the capital. At a time when most buildings were made of wood, wealthy Kawagoe merchants built expensive, clay-walled stores and warehouses, many of which can be seen along Kurazukuri Street.

Kitain, commonly called Kawagoe Daishi, was founded in the year 830. The third Tokugawa Shogun, Iemitsu, transferred parts of the Edo Castle to this place. He was taken care of by the famous Kasuga no Tsubone wet nurse.

Not to be missed on the temple grounds are the 538 Rakan statues. Rakan are enlightened disciples of Buddha. Walking among the statues and oohing and aahing at each noble follower, I found that one spoke to me.

I asked it for guidance, and he told me to go to an eel restaurant, a must-do in Kawagoe. I followed his instructions and experienced the land of perfect bliss.

This article by Lisa Vogt, a Washington-born and Tokyo-based photographer, originally appeared in the Nov. 3 issue of Asahi Weekly. It is part of the series "Lisa’s In and Around Tokyo," which depicts the capital and its surroundings through the perspective of the author, a professor at Meiji University.