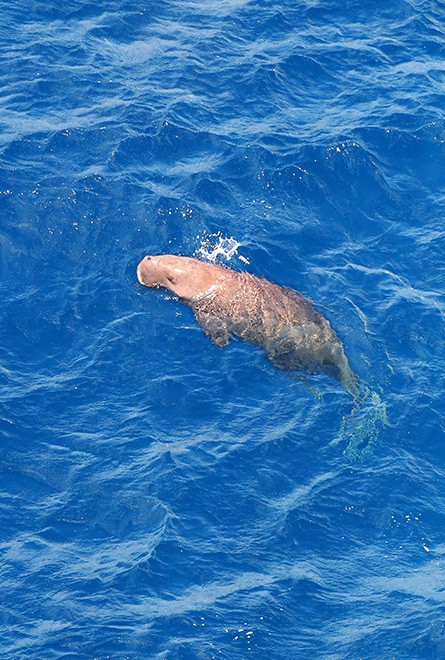 A dugong is seen about 5 kilometers northeast off the coast of Henoko point in Nago, Okinawa Prefecture, in July 2010. (Asahi Shimbun file photo)

Dugongs living around Japan’s southwestern islands are on the brink of extinction, according to an international group’s report that has fueled criticism over the construction of a U.S. military base in the region.

The International Union for the Conservation of Nature (IUCN) listed the sub-population of dugongs as “Critically Endangered” on its revised Red List of Threatened Species released on Dec. 10.

“Critically Endangered” is one category below “Extinct in the Wild.”

The IUCN said the population of the sea mammals in the Nansei island chain has declined, with only 10 or fewer mature individuals left. The Nansei chain stretches from the Osumi islands in Kagoshima Prefecture to Japan's southernmost prefecture of Okinawa.

In the global assessment of the dugong population in past IUCN red lists, the animals were listed as “Vulnerable,” meaning they are increasingly at risk of becoming extinct.

The assessment of dugongs only in Japan’s southwestern waters was conducted for the first time for the latest red list.

Dugongs are known to live in offshore areas where reclamation work has started for a new air base in the Henoko district of Nago, Okinawa Prefecture.

The planned facility, which has come under fire from local residents and the Okinawa prefectural government, will take over the functions of the U.S. Marine Corps Air Station Futenma in Ginowan in the prefecture.

In a statement released on Dec. 11, the Nature Conservation Society of Japan urged the central government to take emergency measures to protect the dugongs, such as suspending construction work to reassess the environmental impact of the relocation plan.