Court sides with transgender woman on toilet use at ministry 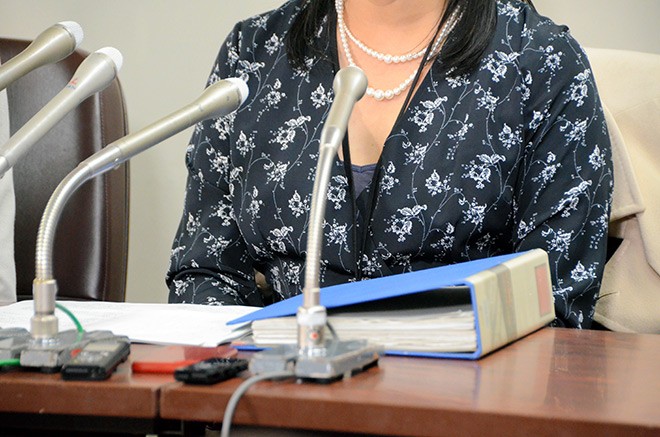 A transgender employee at the Ministry of Economy, Trade and Industry holds a news conference on Dec. 12 after the Tokyo District Court ruled in her favor. (Eri Niiya)

The Tokyo District Court ordered a government ministry to pay 1.32 million yen ($12,000) in compensation to a transgender employee, ruling that its refusal to let her use a toilet for females was illegal.

In the ruling handed down on Dec. 12, the court also said a supervisor’s comment to the employee at the Ministry of Economy, Trade and Industry was inappropriate.

Presiding Judge Takeshi Ebara rejected the ministry’s argument that its actions were justified in part because the transgender woman was still listed as male in the family register.

Noting changes in society and in the consciousness of the public, Ebara said, “Restrictions on legal interests that are important in leading a life in line with one’s sexual identity cannot be legitimized.”

The plaintiff said she was very satisfied with the ruling and hoped that it would provide encouragement to others in similar situations.

“There are many measures that can be taken by individual companies and workplaces,” she said. “I hope companies will take the ruling as an opportunity to implement forward-looking steps.”

Ministry officials said they would decide on whether to appeal the ruling after consulting with other government ministries.

Over 11 years, the employee underwent hormone treatment to develop more feminine features. Outside of work, she began applying makeup and wearing women’s clothing.

Since 2010, the employee showed up at the ministry outwardly appearing as a woman.

Ministry officials argued that there was a need to take into consideration the other female employees on the same floor as the transgender woman.

They also argued that the employee was legally a male.

But the employee had developed skin problems that prevented her from having that surgery.

When she explained that she could not have the surgery and could not change her gender on the family register, ministry officials decided to have her use the distant toilet.

The court ruled that while consideration for female colleagues was necessary, the restriction on the usage of toilets required a decision based on specific circumstances and changes in social conditions.

The court pointed out that the employee had a high degree of gender awareness as a woman because she had been diagnosed with gender identity disorder and had undergone hormone treatment.

Under such circumstances, the court said it would be difficult for her to use the men’s toilet.

The ruling said that social changes have led to “strong awareness in Japan about the importance of providing a work environment in which transgender employees can work without problems.”

The court not only ruled that the ministry’s measures were illegal, but it also took issue with the comment of a superior.

The superior told the employee, “If you are not going to undergo the surgical procedure, why don’t you revert back to a man?”

The court said that comment went beyond legal limits.

The plaintiff also said ministry officials had demanded that she reveal her sexual identity to female colleagues if she was transferred to a different post.

Toshimasa Yamashita, a lawyer for the plaintiff, praised the ruling for “respecting sexual diversity” and “rejecting a uniform response based on legal definitions of gender.”

Another lawyer, Yuka Tateishi, said the ruling sent a powerful message that consideration for the personality of individuals was “not in any way pioneering but something that should be naturally carried out.”

(This article was compiled from reports by Eri Niiya, Yuki Nikaido and Takuya Kitazawa.)