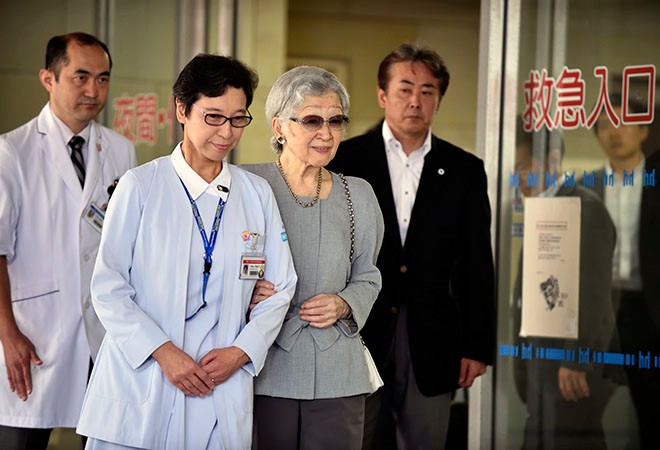 Empress Emerita Michiko, center, who underwent successful surgery to remove cancer in her left breast on Sept. 8, leaves the University of Tokyo Hospital in Tokyo on Sept. 10. (Pool Photo via AP)

Empress Emerita Michiko has been vomiting blood and losing weight since September, when she had surgery for early-stage breast cancer, but the cause of both remains undetermined, a palace official said on Friday.

It was the most detailed update on the health of the 85-year-old retired empress since her surgery.

Michiko has been undergoing hormone treatment for breast cancer since the surgery, but while a side-effect is often nausea, this did not appear to be the cause of the vomiting, which was mixed with blood, the official said.

The source of the blood also does not appear to be her stomach, with doctors continuing to observe the situation.

A local news agency report said that earlier this year test results that can indicate poor heart function led to further investigation that found a heart valve malfunction, but the official declined to confirm this.

After three decades on the throne, Michiko and her husband Emperor Akihito stepped down in April, accepting the titles empress emerita and emperor emeritus. They are both set to undergo a regular twice-yearly physical exam later this month.