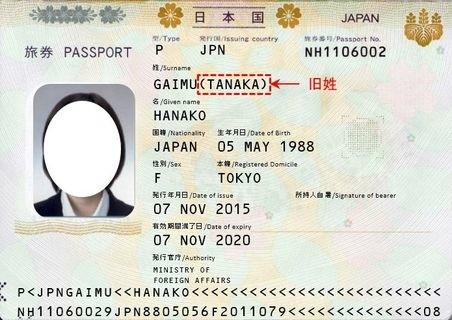 The government seems stuck in its outdated policy of not allowing married couples to use separate family names if they wish, although it has taken partial measures to deal with problems caused by this anachronistic way of thinking.

Starting this month, married drivers are allowed to show their original (prenuptial) family names in their newly issued driver’s licenses, in square brackets and placed after their current legal names. Similar measures were taken last month with regard to certificates of residence and “My Number (identity) cards.”

The government touted these steps as policy support for those who want to use their original family names in their private life.

These changes may be useful for identification purposes to some degree. But it is up to companies and administrative organizations to decide whether original family names can be used in their business activities.

Even when one is allowed to show their original family name, that does not guarantee the person can use it for legal or business purposes.

Holders of Japanese passports have long been allowed to show their original family names along with their legal names in cases where the Foreign Ministry recognizes the necessity of doing so.

The government is considering loosening this rule because it sometimes causes trouble overseas. With no other country legally requiring married couples to use the same family names, a name in brackets shown in a passport can prove confusing to immigration officials overseas.

In August, the Foreign Ministry published a brochure in English explaining the system. But it effectively leaves people to deal with the problem on their own.

An obvious and easy solution to this problem is to revise the law to give married couples the choice between using one of their family names and continuing using their different family names.

But the Abe administration has adamantly rejected this proposal out of fear of losing the support of lawmakers and voters who hold conservative and traditional views about family values. Since this legal requirement causes all sorts of inconveniences, the administration has been taking stopgap measures in response.

It is high time for the government to realize the limitations and harm of this inconsistent and indecisive approach.

Allowing people to show their original family names in their driver’s licenses or other official documents, for instance, only gives them limited benefits in exchange for running the risk of unnecessarily revealing their marital status and their personal views concerning marriage and family names.

This approach also increases personnel management costs for both private-sector businesses and government organizations. In fact, the central government provides 17.6 billion yen ($160.97 million) in state subsidies to local administrations to help cover the costs of tweaking computer programs to deal with certificates of residence and other official documents.

This is simply a waste of taxpayer money.

The judiciary should also be held responsible for the situation.

Four district court rulings have been handed down since autumn that rejected requests for a legal change to allow married couples to use the surnames they were born with.

The court decisions simply followed a precedent set four years ago by a Supreme Court ruling that declared a civil code provision requiring married couples to use a same family name to be constitutional.

None of the district court arguments for their decisions gave any sign of recognizing the issue concerns the “respect for individual rights and dignity” that is at the heart of the Constitution.

In the judicial community, judges and prosecutors are now allowed to use their original family names for professional purposes under a measure introduced without any legal basis.

That means acts of arresting, prosecuting and sentencing people to prison, which are all forceful exercises of state power, can be conducted with old family names that are not legally recognized and can be shown in a driver’s license only in brackets. This is an extremely odd situation.

The problems caused by this approach are now creating unnecessary strains in society. Members of both the political and judicial communities need to confront this reality.