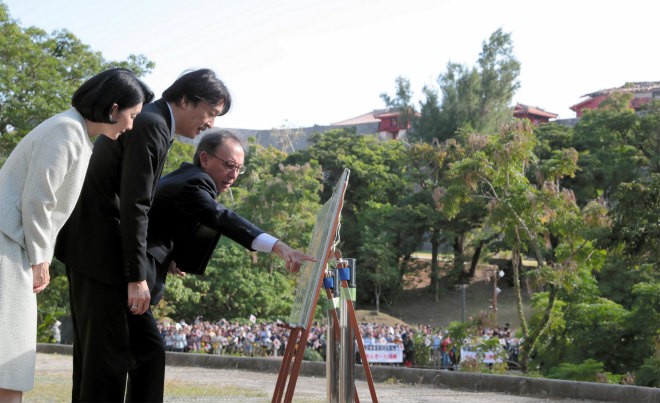 Crown Prince Fumihito, second from left, and Crown Princess Kiko listen to an explanation by Okinawa Governor Denny Tamaki about the burned-out Shuri-jo castle at Okinawa Prefectural University of Arts in Naha on Dec. 15. (Minako Yoshimoto)

NAHA--Crown Prince Fumihito expressed regret over the fire that destroyed Shuri-jo castle here while he looked at the burned-out site along with Crown Princess Kiko on their official visit to Okinawa Prefecture.

The couple viewed the ruins of the castle from the nearby premises of Okinawa Prefectural University of Arts on Dec. 15. The Seiden main hall and other structures of the castle were destroyed in the inferno that started in the early hours of Oct. 31.

Fumihito visited the castle in March on a private trip here.

“Those are the ruins of the burned Hokuden north hall building,” he told Okinawa Governor Denny Tamaki, who was showing the castle to the couple.

Tamaki explained about the damage by showing them aerial photos of the castle taken before and after the blaze. Fumihito overlaid the route of his visit in March on the photos as he looked at them.

Tamaki said they discussed the fire again while having lunch together. The Okinawa governor added that he was asked by Fumihito about items stored at the castle as the crown prince was concerned about the artifacts and art objects lost in the fire.

Ahead of their visit to the castle, the couple attended a national tree-planting ceremony at the Okinawa Convention Center in Ginowan, Okinawa Prefecture.

“I believe that it is very important not only for humans but also for a number of creatures living on Earth to pass on precious lush forests to future generations,” Fumihito said in his speech.