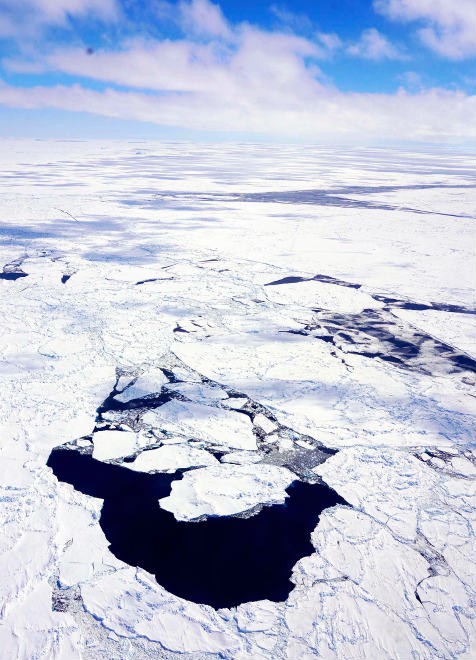 The area around the Totten Glacier is the destination for a team of the 61st Japanese research expedition to Antarctica on Dec. 14. (Yumi Nakayama)

ABOARD THE SHIRASE--After navigating the seas for 13 days, the icebreaker Shirase entered the Antarctic Circle, giving Japanese researchers a view of breathtaking beauty and a problem with potentially catastrophic consequences.

Japan’s 61st research expedition to Antarctica arrived off the Totten Glacier in the eastern part of the frozen continent on Dec. 14 to conduct a series of observations.

To approach the observation point, the 138-meter Shirase, which departed Fremantle in Western Australia on Dec. 2, had to repeatedly back up and then build up momentum to crack the sea ice.

On the morning of Dec. 14, a team entered a large helicopter on deck to start their research.

A white and gentle ball that looked like the horizon appeared in the view to the south from the helicopter. It was the Antarctic continent.

But the center of the researchers’ attention is the sea area around the Totten Glacier.

Warm seawater is believed to be drifting under the end of the glacier, causing a substantial amount of ice to melt.

The researchers fear that such losses of ice will cause sea levels to rise around the world.

The Japanese expedition team is conducting various observations to determine what is happening at the point where the ocean and the ice meet.

As the helicopter reduced its altitude and changed locations, the observation team dropped 15 devices through gaps in the ice from the open backdoor.

Within almost one minute of the drops, Kaihei Yamazaki, a 26-year-old team member who is a graduate student at Hokkaido University, excitedly notified others in the helicopter.

“Here comes the data,” he cried out.

The information from one of the devices showed water depth, water temperature and saline concentration.

Another team member, Yoshihiro Nakayama, a 33-year-old assistant professor at Hokkaido University, said he had been nervous about how the very first observation would go.

“It was a success thanks to many people’s efforts,” he said. “I am very thankful.”