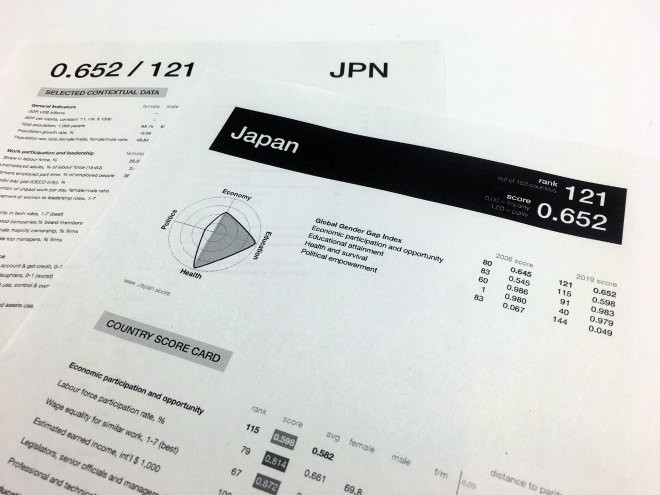 Japan's standing in the international community will keep plummeting due to its failure to empower women, experts said after the nation dropped to its lowest ranking ever, 121st, in the latest global gender equality survey.

According to the World Economic Forum, a Swiss-based nonprofit foundation, Japan also chalked up the lowest ranking among Group of Seven major economies once again. The report for 2019 surveyed 153 countries.

Mari Miura, a professor of political science at Sophia University in Tokyo, blamed Japan’s dismal performance on its negligence over the years to tackle gender gap issues.

“Japan has neglected the problem of gender disparity over the past 30 years,” she said. “On the other hand, other countries have striven to build frameworks that respect diversity and provide women with more opportunities. As things stand, Japan will be left further behind in the world.”

In the educational attainment category, countries are assessed by such benchmarks as literacy rate and enrollment rate by age groups, while healthy life span is a key indicator in the health and survival category.

Gender parity is represented by 100 percent.

This year’s report pointed out that globally, women still have a long way to go to increase their presence and participation in politics.

The report stated that on average, women accounted for 25 percent of the membership in lower chambers of national assemblies and 21 percent of Cabinet members.

Japan’s overall ranking was dragged down primarily by its poor showing in political representation.

The ratio of women in Japan's Lower House of the Diet stood at 10.1 percent. Of 19 Cabinet members, only one, or 5.3 percent, was female before a Cabinet reshuffle in September.

The comparable figures were nearly 40 percent in Iceland, which maintained its No. 1 ranking for the 11th year in a row. Other Nordic countries also nailed high scores in the category of female representation in politics.

“It is not surprising anymore,” said Toshihiro Nikai, secretary-general of the LDP during a Dec. 17 news conference. “What is important is to make steady efforts to reach an ideal state step by step.”

The LDP holds about 60 percent of all seats at the Lower House. But female members represent only 7 percent of LDP lawmakers in the chamber.

Women accounted for only 15 percent of LDP candidates in the Upper House election in July. It was the first national election held after a law went into force requiring political parties to field an equal number of male and female candidates.

“We deserve the criticism that we did not work hard enough to meet the goal,” Abe said at the time of the election.

With the four-year term of Lower House members already halfway through, the LDP has yet to announce steps to significantly raise the number of female candidates.

Shunichi Suzuki, chairman of the LDP’s General Council, pinned part of the blame on voters for women’s poor representation on grounds it is voters who elect lawmakers.

The figure for the Japanese Communist Party was 55 percent.

“Achieving gender equality is a global trend,” said Akira Koike, secretary-general of the JCP. “We will bolster efforts to overcome the old way of political thinking of domination of men over women."

In the latest rankings, South Korea placed higher than Japan, raising its standing to 108th from last year’s 115th.

Shin Ki-young, an associate professor of comparative politics at the Graduate School of Humanities and Sciences at Ochanomizu University, attributed South Korea’s showing to the leadership of President Moon Jae-in.

Moon, who projects himself as a president with a feminist agenda, named five women to Cabinet posts when he took office in 2017. He pledged that half of the Cabinet membership would be female by the end of his five-year term.

Seoul also introduced a quota system in 2000 in an effort to encourage more women to enter politics by requiring political parties in national elections to place women alternately in the list of candidates for the proportional representation segment.

Currently, 16.7 percent of South Korea’s National Assembly members are women, as opposed to Japan’s 10.1 percent at the Lower House.

In the latest gender equality ranking report, Spain made a spectacular leap to 8th place from last year’s 29th, reflecting a rise in the number of female lawmakers and Cabinet members.

(This article was compiled from reports by Yu Yoshitake in Geneva and Junichi Bekku, Sawa Okabayashi and Erina Ito.)