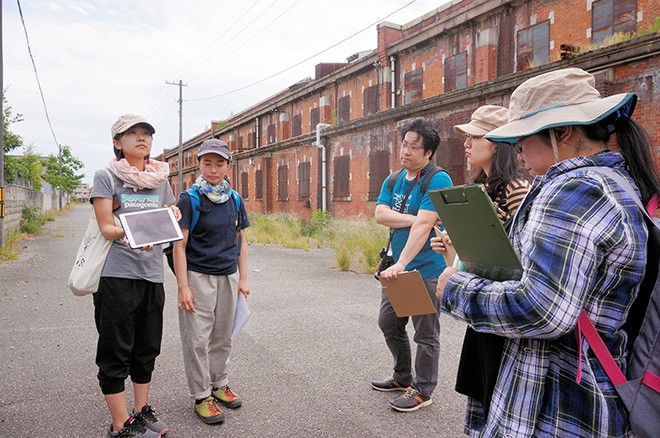 HIROSHIMA--A former Imperial Japanese Army clothing factory that emerged more or less intact after the 1945 atomic bombing of this city is due to be torn down unless authorities can be persuaded to preserve the historic structure.

Mayu Seto, who works with Fukuoka, submitted about 12,000 signatures collected over the first five days to the prefectural government on Dec. 16.

The online campaign will continue.

The factory is one of the largest structures left standing in Hiroshima after the nuclear attack. It is also one of the oldest reinforced concrete structures in Japan.

Completed in 1913, the facility produced military uniforms and boots for Japanese troops. The structure, situated just 2.7 kilometers from ground zero, served as an aid station in the aftermath of the atomic bombing.

The factory often features in wartime accounts given by hibakusha atomic bomb survivors.

Hiroshima Prefecture on Dec. 4 presented its plan to demolish two of three buildings it owns on the plant grounds at a prefectural assembly session.

It argued that despite their historical significance, the buildings are at risk of collapsing in a major earthquake.

It estimated the cost of structural refurbishment at as much as 8.4 billion yen ($77.27 million). The floor area of the three buildings totals 16,700 square meters.

After learning of the prefecture’s plan in a news program, Fukuoka, 27, reasoned that “not only hibakusha, but also others would want the buildings that survived the atomic bombing to be conserved.”

Earlier this year, Fukuoka and Seto, 28, a resident of Kure, Hiroshima Prefecture, began giving a guided tour that traces the steps of 89-year-old hibakusha Iwao Nakanishi on Aug. 6, 1945.

Nakanishi was working at the clothing factory as a 15-year-old boy at the time. Tour participants follow the 8-kilometer route he took after the atomic bomb was detonated.

“We must continue efforts to preserve tools in the city to present the history of Hiroshima,” said Fukuoka, who once served as a government-designated Youth Communicator for a World without Nuclear Weapons.

“I hope that the campaign will help make people understand my resolve.”

A citizens group headed by Nakanishi is also calling for protection of the buildings.

"The clothing factory, which shows what Hiroshima was like as a city home to military installations, represents the history of Japan, including its role as an aggressor," said Nakanishi. "I am boiling with anger after hearing about the prefecture's policy."

Under the prefecture's plan, the walls, roof and other parts of the No. 1 building nearest to ground zero will undergo restoration by fiscal 2021 to preserve its current appearance. The neighboring No. 2 and No. 3 buildings are expected to be torn down by fiscal 2022.

Hiroshima Prefecture is looking to include the necessary funds totaling 800 million yen in the draft budget for the next fiscal year.

The remaining No. 4 building is owned by the Finance Ministry's Chugoku Local Finance Bureau, which is also considering the possibility of dismantling the structure.

The clothing factory is among 86 buildings recognized by Hiroshima city as having survived the atomic bombing in areas within 5 km of the blast center.