Juveniles of rare deep-sea fish spotted off coast of Shizuoka

Juvenile polka-dot ribbonfish and oarfish float in waters near the surface off Osezaki point of Numazu, Shizuoka Prefecture, on Dec. 21. (Provided by Kazushige Horiguchi) 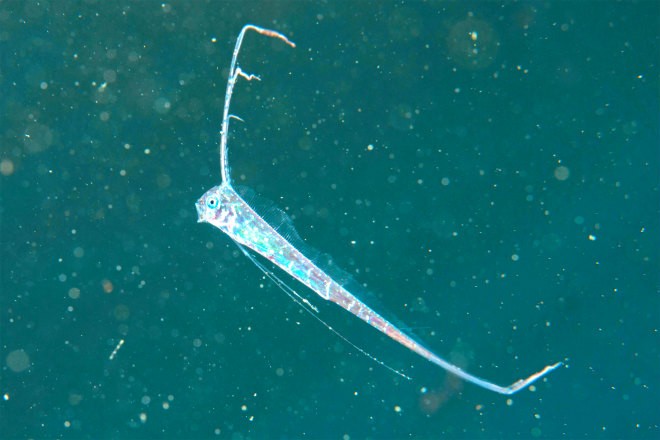 The young of oarfish float in waters near the surface off Osezaki point of Numazu, Shizuoka Prefecture, on Dec. 21. (Provided by Kazushige Horiguchi)

Horiguchi, 33, of Nishi-Izu in the prefecture, encountered and shot video of the two creatures when he dived in the sea off Osezaki point in the city.

As mature oarfish and polka-dot ribbonfish inhabit deep ocean waters, it is rare for humans to catch a glimpse of them.

Although their young are believed to remain in waters near the surface for a time right after hatching, feeding on plankton, details of their life cycle largely are unknown.

According to a Japanese legend, the oarfish is a messenger from the sea god's palace and its appearance foretells either a great catch--or an earthquake.