Murakami draws laughs in reading in Japan, his first in 24 years 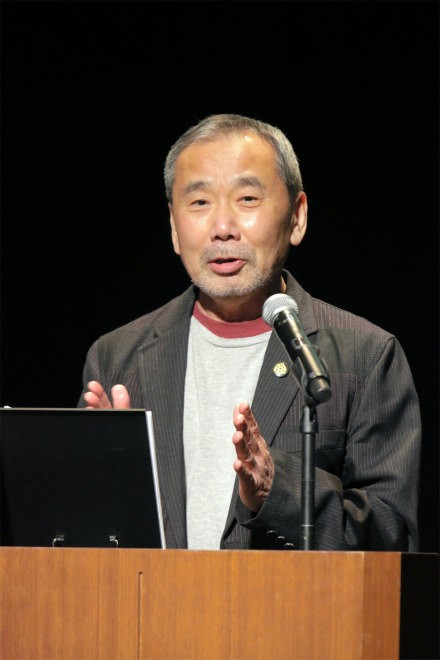 Novelist Haruki Murakami reads his novel in a public reading in Tokyo on Dec. 17. (Provided by Shinchosha Publishing Co.)

Renowned novelist Haruki Murakami has entertained a global audience with his prize-winning works, but who knew he could also work a crowd as a voice actor?

Murakami’s first public reading in Japan in nearly a quarter-century drew much laughter from the audience as he humorously delivered the lines of a monkey, the protagonist of his new novel, in a scratchy voice.

Murakami held the session in Tokyo on Dec. 17 with acclaimed novelist Mieko Kawakami to mark the 40-year anniversary of his debut as a novelist.

The reading was also held to mark the release in November of a paperback edition of their 2017 book, “Murakami Haruki A Long, Long Interview by Kawakami Mieko.”

About 400 people were invited to the gathering from the 2,000 or so who applied.

Although Murakami is known to hold a small gathering overseas from time to time, he rarely does a public reading in Japan.

The session followed two charity readings he gave in Kobe and Ashiya in the autumn of 1995 to help victims after the two cities in Hyogo Prefecture were ravaged by the Great Hanshin Earthquake in January that year. Murakami is from Hyogo Prefecture.

Kawakami, 43, said she attended both sessions as a big fan of his.

“I was working at a bookstore at that time, and I was fortunate enough to win a seat when I applied for the two readings,” she said. “I also stood in line to get his autograph.”

At the Tokyo reading, both writers read their own works.

The 70-year-old novelist read his new short novel due to be carried by a literary magazine in January, titled “Confessions of a Shinagawa Monkey.” The work is a sequel to “A Shinagawa Monkey,” one of the stories in “Tokyo Kitanshu” (Five strange tales from Tokyo), a book published in 2005.

"I was curious about the Shinagawa monkey's life after that, and I could finally finish the new novel," he said.

As Murakami read the monkey’s lines with good humor, it elicited big laughter from Kawakami and the audience.

“I have never attended a public reading where I have laughed this much,” she said.