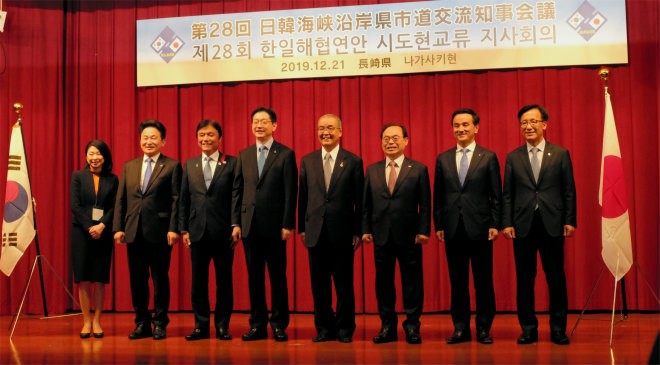 Leaders of eight local governments in Japan and South Korea gather in Nagasaki on Dec. 21 for the Japan-Korea Strait Governor meeting. (Mizuki Enomoto)

NAGASAKI--Even while their respective central governments remain at odds, leaders of Japanese and South Korean local governments called for the continuation of exchange programs to underpin friendly bilateral ties.

They also expressed hopes that talks on Dec. 24 between Prime Minister Shinzo Abe and South Korean President Moon Jae-in in China on the sidelines of a trilateral summit will lead to a thaw in bilateral relations.

The leaders of eight local governments, four from Japan and another four from South Korea, met in Nagasaki on Dec. 21 under the Japan-Korea Strait Governor meeting, which promotes regional development and friendship.

“We are neighbors who cannot relocate to other places,” said Nagasaki Governor Hodo Nakamura. “It is preferable that tensions of the two countries should be eased.”

The Japanese delegation represents Fukuoka, Saga, Nagasaki and Yamaguchi prefectures, while the South Korean representatives came from Busan and the provinces of Jeollanam-do, Gyeongsangnam-do and Jeju.

The Japanese prefectures and South Korean provinces are situated close to each other across the Tsushima Strait.

There were initial concerns that the annual gathering since 1992 might not be held this year after the two neighbors saw their relations plunge to their lowest level in the postwar era.

The South Korean top court’s orders since late last year for Japanese businesses to pay compensation to wartime Korean laborers sparked a sharp response from Japan, which retaliated with tightening of export controls this summer.

A string of scheduled exchange programs has been canceled at many cities as a result.

But the heads of all of the eight local governments, including Busan Mayor Oh Keo-don, gathered to discuss a range of issues, including employment for young people.

Oh’s attendance came after he signaled reluctance this summer to promote exchanges with Japanese municipalities, saying he would undertake a wholesale review of such projects.

“My visit is intended to get rid of an unfavorable climate,” he said. “It took me only 30 minutes to fly here, while it takes me an hour and half to get to Seoul. It is desperately needed for regional leaders of the two countries to deepen their friendly ties and discuss shared issues.”

Although the mayor criticized the Japanese government’s strengthening of export regulations to South Korea, he noted a move has emerged in Japan to ease those controls.

“Now is the right time for moving to mend bilateral relations,” Oh said.

The regional leaders are expected to visit the Nagasaki Atomic Bomb Museum and other local sites on Dec. 22.

Kim Kyeog-soo, governor of Gyeongsangnam-do province, underscored the need for assisting aged Koreans who survived the atomic bombings in Hiroshima and Nagasaki while they were in Japan during World War II.

“Currently, there are about 800 atomic bomb survivors in Gyeongsangnam-do province,” he said. “How to assist them is an issue that has to be resolved by both South Korea and Japan.”