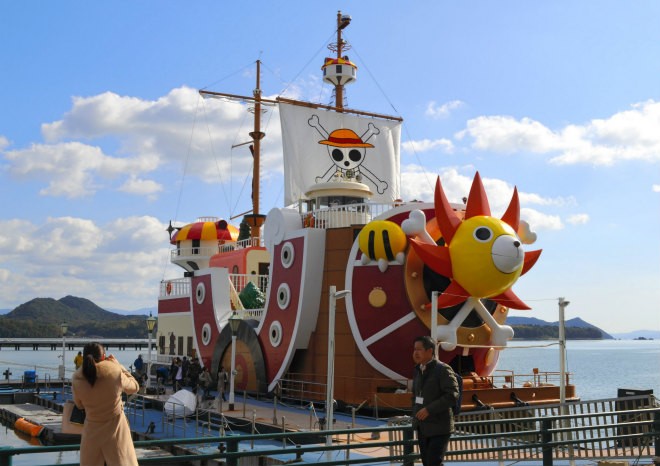 The Thousand Sunny docks at the Huis Ten Bosch theme park in Sasebo, Nagasaki Prefecture, for the first time in four and a half years to cruise around Omura Bay. (Shinya Haraguchi)

SASEBO, Nagasaki Prefecture--A pleasure boat modeled after the Thousand Sunny, a pirate ship from the popular “One Piece” manga series, is back at the Huis Ten Bosch theme park here by popular demand.

The vessel arrived in late November after a hiatus of four and a half years.

It was introduced in spring 2011 by Hideo Sawada, now chairman of Huis Ten Bosch Inc., as part of efforts to revive the company's fortunes in the face of a management crisis.

Attendance to the recreated cityscape of the Netherlands had dwindled, and the company was desperate to turn around the public’s image of the park.

The Thousand Sunny carried more than 1.2 million passengers in the four years it operated here, contributing to a V-shaped recovery in company revenues. It also became the symbol of the new Huis Ten Bosch.

The pirate ship left the park in spring 2015 to help another theme park in Aichi Prefecture run by the parent company. It is now back by popular demand.

A contributing factor was that this year marks the 20th anniversary of the manga’s animated TV series adaptation produced by Toei Animation Co.

Supervised by the anime studio, the Thousand Sunny shows a striking resemblance to the pirate ship from the original work. Life-size statues of the protagonist, Luffy, his allies Zolo, Sanji, Nami, Usopp and other members of the Straw Hat Pirates, are installed across the ship, greeting passengers with lines spoken by the voice-recording artists playing the characters.

“One Piece has a large fan base outside Japan as well,” a company representative noted. “We can also expect to attract inbound tourists.”

The pleasure boat operates daily seven times a day. Extra services are planned for the year-end and New Year holidays and other occasions. Cruises around the calm waters of Omura Bay take about 30 minutes.