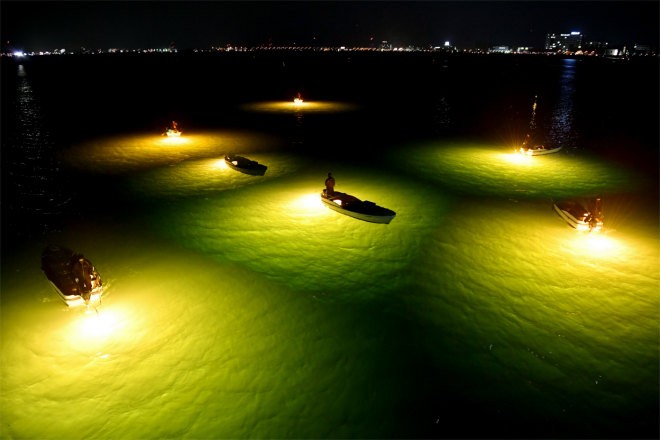 TOKUSHIMA--Eel season kicked off on the Yoshinogawa river here with fishermen on boats turning the water green and yellow as they cast their lamps over it in search of the endangered fish.

The Environment Ministry has designated the Japanese eel as “facing a high risk of extinction in the wild in the near future.”

In winter, juvenile Japanese eels swim upstream in rivers in Japan and China.

Hoping to land the fish, which are fetching lucrative market prices as catches have sharply declined, numerous boats on Dec. 19 crowded around a mouth of the Yoshinogawa river.

Eels caught in the city fetch varying prices depending on the year's catch, but usually go for 1 million yen ($9,140) to 1.5 million yen per kilogram, according to the fisheries promotion department of the prefectural government.

The season continues through April.