Ichiro Suzuki gives a speech at the closing ceremony of the Ichiro Cup baseball tournament in Toyoyama, Aichi Prefecture, on Dec. 22. (Video footage by Jun Ueda) 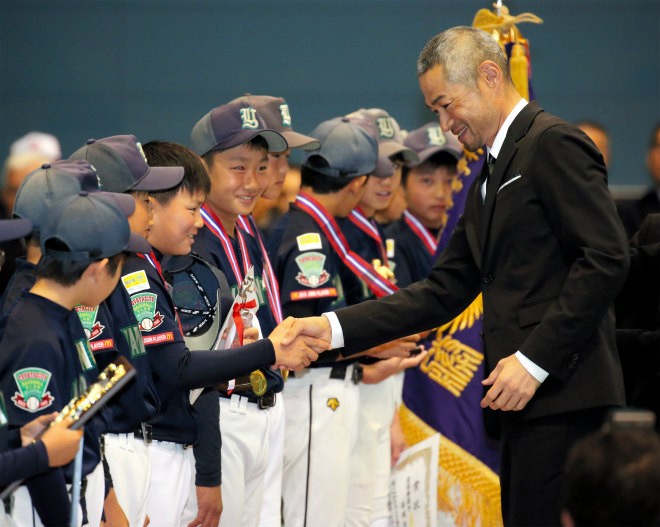 TOYOYAMA, Aichi Prefecture--Ichiro Suzuki announced another retirement, this time as president of a children’s baseball tournament named after him, and provided some sage advice to the young players who attended.

“I recommend that each of you train yourself before becoming adults,” Suzuki said on Dec. 22 in his home town of Toyoyama. “Under the current period, when it is difficult for teachers to teach in a strict manner, you are the person who can teach yourself in the end.”

His speech came at the closing ceremony of the Ichiro Cup baseball tournament.

The 24th and final tournament was held from May to November, with 180 teams of elementary school age taking part from Aichi, Mie, Gifu and other prefectures.

Suzuki, 46, decided to end the tournament with his own retirement from professional baseball. The hitting machine and Gold Glove-winning outfielder ended his 28-year pro career in March.

He noted that things have changed since the first Ichiro Cup was held in 1996.

He told the children that they can learn so much now on smartphones, but they should experience, feel and understand things in their own way.

One player touched on Suzuki’s attendance at a Dec. 13 seminar in Tokyo held for retired ballplayers and others interested in coaching amateur players, such as high school and university teams. The qualification test will be held in February.

“Where can I receive your instructions?” the pupil asked Suzuki.

The former major league star replied that he will teach at various places if he does not commit to a specific school.

“If you tell me in the future that you were the one who asked me this question, I won’t forget you because this is the last closing ceremony,” Suzuki said. “My condition for teaching you is that you continue playing baseball.”

A number of players in Ichiro Cup tournaments have gone on to the professional level.

For example, Takaya Ishikawa and pitcher Hiroaki Matsuda were both signed by the Chunichi Dragons in autumn.

Pitcher Kazuaki Tateno, who is also from Toyoyama, played in the tournament as a child and is now with the Nippon Ham Fighters.

Tsutomu Shimomura, 65, manager of Two Three Obu, said: “Many kids copied Ichiro’s batting form and other styles. They felt encouraged to make it to the final game and meet Ichiro.”

Suzuki played nine seasons with the Orix Blue Wave in Nippon Professional Baseball before taking his bats to the United States where he starred for 12 years with the Seattle Mariners.

He also played with the New York Yankees before joining the Miami Marlins in 2015.