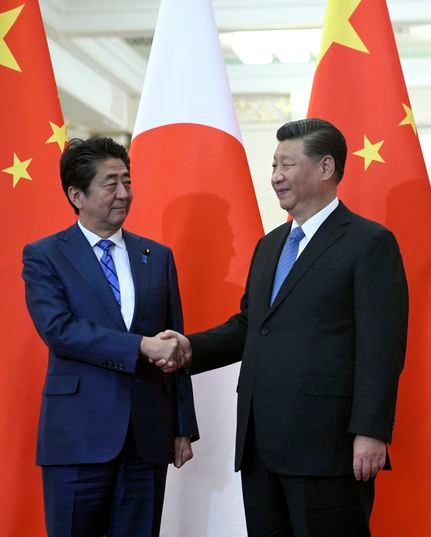 Ties between the longtime rivals have improved remarkably in recent years, despite lingering resentments over Japan's invasion and occupation of much of China last century and its continuing control of East China Sea islands claimed by Beijing.

Japan is also wary about China's rapid military expansion, and there has been a public uproar over the detention of more than a dozen Japanese citizens on spying allegations in China. Chinese naval and coast guard ships also routinely violate Japanese-claimed waters around the disputed islands.

Japanese Foreign Ministry spokesman Masato Otaka characterized the meeting as an additional step in improving relations, to be further cemented by a planned visit by Xi to Japan in the spring.

However, Otaka said Abe did not shy away from sensitive areas, including Japanese concerns over China's handling of matters in the semi-autonomous city of Hong Kong, where months of anti-government protests have turned violent; the northwestern territory of Xinjiang, where China has built a vast network of political reeducation camps in which it has locked up more than a million members of Muslim minority groups; and the cases of detained Japanese, about which Abe asked Xi to take “swift action" to resolve.

Abe also emphasized the importance of maritime security, proposing stronger communication between the navies and air forces of the two countries and cooperation in search and rescue to reduce the chances of confrontation in the East China Sea, Otaka said.

“Mr. Abe stressed that without the stability of the East China Sea, true improvement of (the) Japan-China relationship cannot really happen," Otaka said.