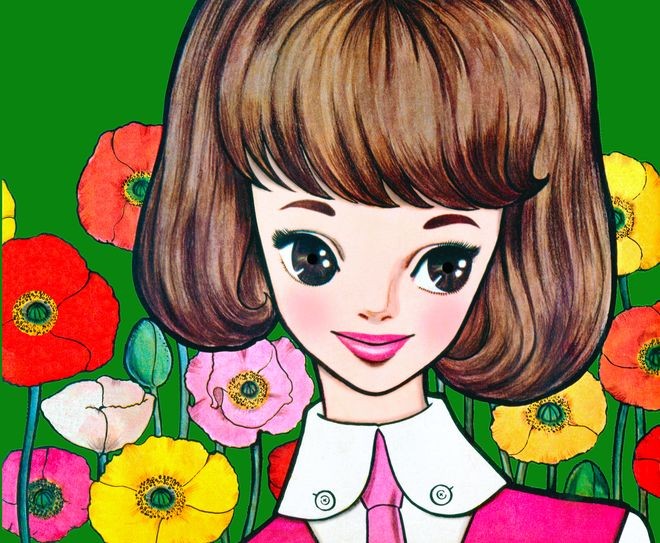 A 2017 reproduction of Rune Naito’s original illustration titled “Tokimeki” (Heart-throbbing) used for the cover of the No. 33 issue of Junior Soleil magazine ((c) R.S.H/ RUNE)

OKAZAKI, Aichi Prefecture--A retrospective dedicated to Rune Naito (1932-2007), known as the pioneer of Japan’s “kawaii” cute culture, is currently running at the Okazaki Mindscape Museum in his hometown.

The versatile artist, whose real name was Isao Naito, was known for creating captivating illustrations of girls with big eyes and thick lips, providing cover illustrations for a girls’ magazine and designs for clothing and other items.

Titled “Roots of Kawaii,” the exhibition offers a chance to explore the origin of the cute aesthetics that has become so widespread in the country.

Naito was fascinated by the works of Junichi Nakahara (1913-1983), who had worked as an editor and illustrator from the prewar to postwar periods and gained popularity among women. He was assigned to creating illustrations for Junior Soleil, a girls’ magazine led by Nakahara, mainly during the 1950s.

Many women were mesmerized by his illustrations of somewhat caricatured, cheerfully looking girls in clear contrast to pre-existing pictures of modest-looking girls.

In addition, Naito not only came up with an interior design plan featuring white cabinets but also a character product known as “Rune Panda,” which influenced panda goods that followed.

The retrospective traces Naito’s life from his childhood to his resurgence in popularity. On display at the venue are about 400 pieces of artworks including magazine covers, book illustrations and original drawings for character designs, some of which are featured for the first time at an exhibition.

In a section dedicated to Naito’s associations with his hometown, letters he wrote to his close classmates and photos from his elementary school days are exhibited.

Meanwhile, the retrospective also shines a light on another side of Naito.

The artist had provided illustrations of young men for Barazoku, a male gay magazine founded in 1971. Naito captured the sensual beauty of men, with prime examples being illustrations of a young man showing his upper body and sitting with a teddy bear and of another young man wearing a classic “fundoshi” loincloth with his arms folded. It is rare for many drawings of young men to be featured alongside illustrations of girls for a Naito exhibition, according to the organizer.

In his autobiography “Subete o Nakushite” (After losing everything), published in 2005 by Shogakukan Creative Inc., Naito talks about his works: “I pursued cheerfulness and sexiness in my illustrations without making them look degraded.”

Naito also mentioned that he was a sexual minority, talking about his feelings for minorities with similar backgrounds.

“In this side of the world, there are many people who secretly endure sufferings and afflictions and live with bated breath.”

Takeo Kamiya, a curator at the Kariya City Art Museum in Kariya, Aichi Prefecture, who has organized Naito’s exhibition in the past, said that the display of the sensual illustrations of male subjects is a sign that society is beginning to accept sexual minorities to go with the flow of the times.

“His illusory expressions found in illustrations of young men, which are different from his signature cuteness, give glimpses of Rune’s internal conflict,” Kamiya said.