EDITORIAL: Raise your voices to close the gap in Japan’s gender equality 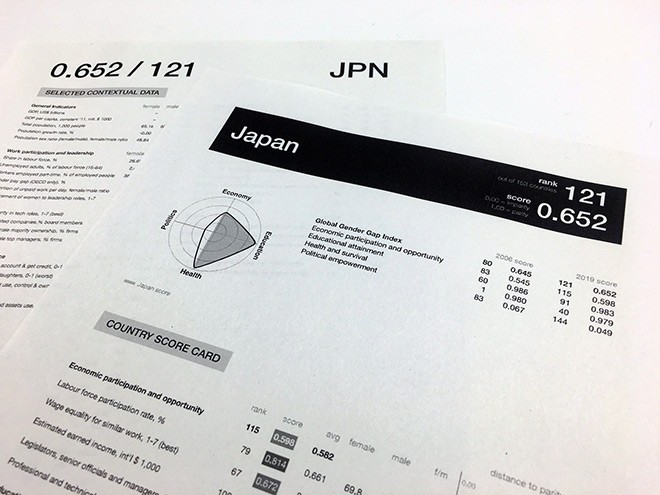 The sure and steady presence of women in politics is a global trend today. Sadly, Japan remains outside that tide.

The World Economic Forum, host of an international conference of prominent political, business and other leaders, publishes the annual Global Gender Gap Report.

In the latest edition covering 153 nations, Japan ranked 121st, its lowest level ever.

The list was compiled by analyzing political, economic, educational and health data. The gender gap narrowed in 108 of the surveyed countries during the past year, but Japan’s index got worse.

The WEF attributed the overall improvement to substantial advances in women’s political participation. More than 120 nations have introduced a system to allocate certain numbers of parliamentary seats and election candidates to women.

This year, women were appointed to the top posts of the European Commission and the European Central Bank for the first time. In Scandinavia and elsewhere, the percentages of women in politics and corporate management are said to grow in tandem.

Women’s increased presence in the labor market can help shrink gender-based wage inequality. The world at large appears to be focusing on new targets, hoping that women’s increased participation in politics will result in more women in corporate management.

Against this backdrop, Japan stands out for its “changelessness.”

The situation is especially bad in politics. Women currently account for only around 10 percent of Lower House members. The primary reason behind Japan’s decline in the latest report was the presence of only a single female in the 19-member Cabinet as of January 2019. In the economic field, Japan was way below the global standard in the number of female managers.

Last year, the Diet passed a law encouraging political parties to field equal numbers of male and female candidates in elections. In the Upper House election this summer, however, women made up only 15 percent of candidates fielded by the ruling Liberal Democratic Party. The Abe administration’s pet slogan of “a society where women can shine” appears to be a bad joke.

If the law is not being observed because it only calls for “making efforts,” lawmakers should consider introducing punitive provisions against non-compliance.

As for the quota system that many nations have already adopted but Japan hasn't, we doubt Japan is capable of arguing its case rationally enough to convince the international community.

More Japanese today are demanding gender equality and taking action. To encourage women to go into politics, academics are holding seminars for aspiring politicians. Such attempts deserve every support.

There are ways to fight off apathy and passive resignation. For instance, we can shun parties that ignore the gender parity law for election candidates. We can also voice objection to any business or organization that discriminates against women.

A society that marginalizes women invariably discriminates against minorities and vulnerable members. To realize a diverse society where everyone can feel they belong, rejecting inequality is the first step to take.