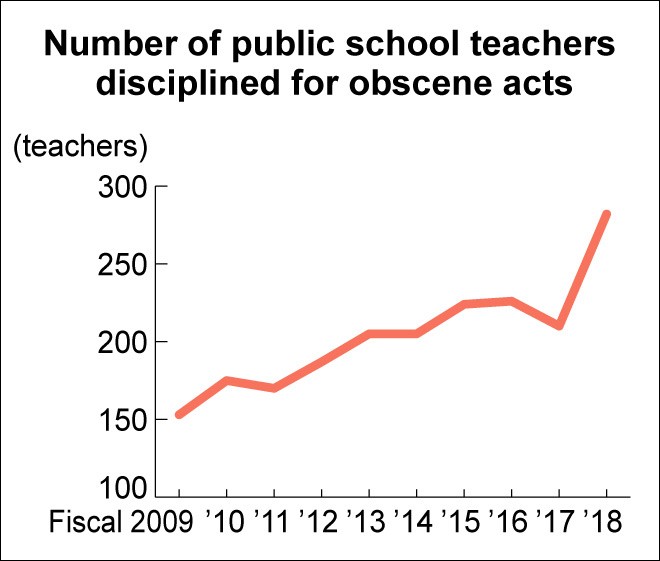 A record 282 public school teachers in Japan were disciplined for sexual and other obscene acts last fiscal year, prompting the education ministry to declare "a strong sense of crisis."

Cases of groping and sneak photography topped the list of actions that a ministry official termed "outrageous."

The ministry released the result of its survey on sexual harassment and other obscene acts involving teachers on Dec. 24. The figure eclipsed the previous year's 210 cases.

The survey examined several types of acts, including traffic offenses and physical punishment, committed by teachers at public elementary, junior high and high schools in all 47 prefectures and 20 ordinance-designated major cities.

The number of obscene acts in fiscal 2018 increased roughly 1.7-fold in the past decade.

Of those disciplined, 276 were men and six were women.

A total of 124, or nearly half the victims, were children at schools where the teachers work. The victims also included 41 other teachers and staff at their schools.

Among those disciplined, 89 involved groping; 48 involved taking sneak photos or video, or engaging in acts of voyeurism; and 41 had intercourse with victims.

Forty of the teachers committed indecent acts at a nurse's office, student guidance or other room at their school; 37 did so at a hotel and another 37 at their home; and 28 in a classroom.

The ministry noted a growing number of cases of interactions between teachers and children through social media.

It pledged to draw up measures after examining those taken by Saitama Prefecture, which prohibits instructors from contacting students in a personal manner online.

Among those disciplined for obscene acts in fiscal 2018, a record 163 were dismissed.

Disciplinary measures for lewd acts by teachers vary across the country. For this reason, the ministry said it will meet with officials of Hyogo and Kochi prefectures and Shizuoka and Okayama cities to provide administrative guidance on steps to more strongly punish offenders.

Shizuoka's disciplinary provisions stipulate suspension from work as the heaviest form of punishment in such cases, while Hyogo and Kochi prefectures, along with Okayama, lack standard provisions to discipline teachers who commit lewd acts.

Among the disciplined teachers, some found new jobs at schools in other prefectures by using a false name. The ministry is insisting that prefectural and municipal authorities adopt stricter screening processes for candidate teachers.