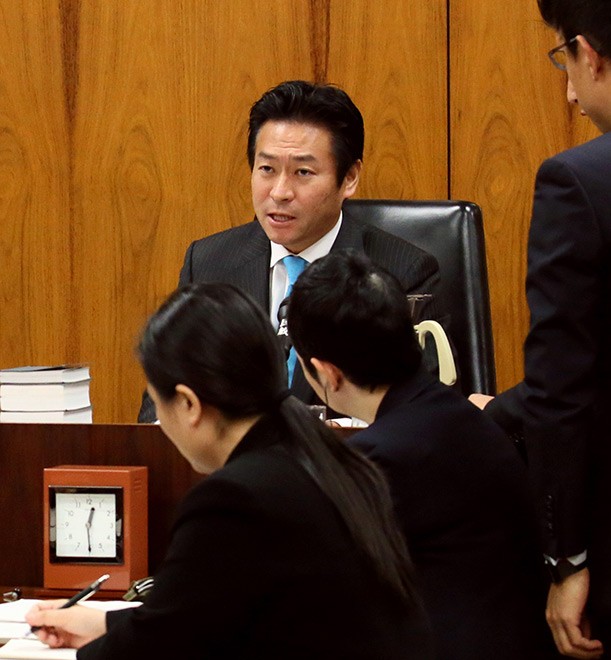 Tsukasa Akimoto, a ruling Liberal Democratic Party lawmaker who once oversaw issues related to integrated casino-resort projects, was arrested on Dec. 25 on suspicion of taking bribes from a Chinese company involved in online gambling.

Tokyo prosecutors suspect that Akimoto, 48, accepted about 3.7 million yen ($33,820) in bribes in return for providing favors to the company, 500.com, in its efforts to operate a casino business in Japan.

“I am sorry for causing this kind of situation and such a commotion,” the Lower House member said on his Twitter and Facebook accounts just after 10 a.m. “But I have no involvement in any wrongful act, and I will continue to claim that.”

According to LDP sources, Akimoto, through his lawyer, submitted a notice of his intention to leave the party.

The Tokyo District Public Prosecutors Office in the morning asked Akimoto, who represents Tokyo’s 15th district, to submit himself for questioning. Akimoto complied.

Prosecutors on Dec. 25 also arrested three officials of 500.com: a 37-year-old man in Tokyo who had claimed to be the company’s vice president; a 48-year-old corporate adviser in Naha; and a 47-year-old former assemblyman of Urazoe, Okinawa Prefecture, who is also a corporate adviser to company.

Prosecutors initially investigated Akimoto in connection with a possible violation of the Foreign Exchange and Foreign Trade Law by a Japanese man claiming to be an executive officer of 500.com. The man had brought a large amount of cash into Japan without notifying customs officers, sources said.

As part of the investigation, prosecutors earlier this month searched Akimoto’s offices in Tokyo and the homes of his former aides.

They also searched the Tokyo office of the Chinese company, questioned the aides and others, and analyzed the confiscated materials.

Prosecutors requested an arrest warrant for the politician on Dec. 24.

Akimoto was vice minister of the Cabinet Office from August 2017 to September 2019, and he oversaw integrated resort projects through October 2018.

The Chinese company, headquartered in Shenzhen, Guangdong province, has operated online casinos and other businesses and established a Japanese subsidiary in July 2017.

The following month, 500.com held a symposium in Okinawa Prefecture to promote its business regarding a possible integrated resort project. Akimoto gave a lecture at the symposium along with the company’s CEO.

Three months later, in December 2017, Akimoto invited other Diet members to accompany him on a tour of IT companies in Shenzhen, where he visited the headquarters of 500.com, according to sources.

The sources said the CEO told Akimoto and the others that 500.com was interested in integrated resort projects in Japan, saying, “It will be a business opportunity if (the company) can operate casinos in Japan.”

A senior official with 500.com visited Rusutsu village in Hokkaido in January 2018 and showed a willingness to invest in a planned casino project there.

In mid-February of that year, Akimoto and his family traveled to Hokkaido on the invitation of 500.com, which paid about 700,000 yen in airfare, accommodation fees and other expenses for the family.

The Hokkaido government ended up scrapping the integrated resort plan.

Prosecutors have gathered related materials from the Hokkaido government and the Ministry of Land, Infrastructure, Transport and Tourism, which manages integrated resort projects. They have also questioned officials of Rusutsu village on a voluntary basis, as well as Akimoto.

The lawmaker in an earlier interview with The Asahi Shimbun denied receiving cash or other types of illegal payoffs from the Chinese company.

“That didn’t happen 100 percent,” he said. “I have never given a favor for the Chinese company or any other operators of integrated resort projects.”

The arrest could deal another blow to the central government’s economic growth strategy of promoting integrated resort projects to increase the number of foreign visitors to Japan.

At his morning news conference on Dec. 25, Chief Cabinet Secretary Yoshihide Suga said he had not yet received details of Akimoto’s arrest.

“I am afraid I cannot comment on the matter (because it) involves the activities of an investigating authority,” the government’s top spokesman said.

But Suga did say that the promotion of integrated resort projects will continue.

“The government will proceed to realize the positive impact of integrated resort projects as soon as possible,” he said.

According to an outline of the government’s plan, integrated resort projects will open in as many as three locations in the 2020s.

But public disapproval of casinos runs deep. Critics, for example, said the casinos in the resorts could exacerbate gambling addiction problems in Japan.

“The government’s integrated resort projects already have had a bad name, and it will be worse (with Akimoto’s arrest),” a middle-ranking LDP member said. “I think it will have an impact on future policy promotions.”